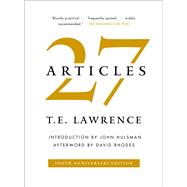 In 1916, T.E. Lawrence was deployed to the Arabian Peninsula to aid with the Arab Revolt against the Ottoman Empire. It was the middle of World War I and the British command was throwing its weight behind the long-rebellious southern territories of the Ottoman Empire. Lawrence had extraordinary success fighting alongside the coalition of Arab revolutionaries, and his story has since become legend. Worried that Lawrence would die on the battlefield and that his knowledge would vanish with him, British command asked Lawrence to write out a series of guidelines on his own tactics and teachings.

27 Articles, the text of Lawrence’s guidelines, has become required reading for military leaders. Lawrence’s deployment was the West’s first modern involvement in war in the Middle East, and his campaign held myriad lessons for future generations. Despite being a century old, the articles are deeply prescient on the challenges America has faced in its wars in Iraq and Afghanistan. Terse and to the point, Lawrence’s articles begin on the battlefield but their value extends well beyond, into the fields of management, leadership, and business.

On the 100th anniversary of 27 Articles’ original publication, foreign policy John Hulsman and CBS News President David Rhodes now speak to the articles’ ongoing importance, outlining the wisdom they hold for political, military, and business leaders on into the future.
T.E. Lawrence, popularly known as Lawrence of Arabia, lived from 1888 to 1935. He was a British military officer and diplomat, acting as a crucial liaison with Arab forces during the Arab Revolt against the Ottoman Empire from 1916 to 1918. The basis for the 1962 movie Lawrence of Arabia, his best known book is Seven Pillars of Wisdom, describing Lawrence’s experiences during the revolt, while 27 Articles summarizes his techniques and tactics.

John Hulsman is a foreign policy expert and life member of the Council on Foreign Relations. He is president and cofounder of John C. Hulsman Enterprises, a global political risk consulting firm. He has a PhD in International Relations from the University of St. Andrews, Scotland, and is the author of several books including a biography of Lawrence of Arabia titled To Begin the World Over Again.

David Rhodes is president of CBS News, where he oversees the award-winning news division’s programming on broadcast, radio, and digital platforms, including CBSN, the first 24/7 anchored streaming news network. He became a Young Global Leader of the World Economic Forum in 2013 and is a member of the International Media Council at the annual meetings in Davos. He graduated from Rice University and currently sits on the Board of Trustees and the James A Baker III Institute Advisory Board. He lives with his wife Emma and two children in New York City.
What is included with this book?