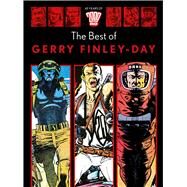 From Tammy to the Eagle, Gerry Finley-Day was one of the most prolific comic book writers throughout the 1970s and 80s.

His work for 2000 AD in particular was extraordinary and included such beloved strips as future war G.I. Rogue Trooper, the 'Great escape' in space titled Harry 20 on the High Rock, the Star Wars inspired V.C.'s and a gritty 1970s take on the iconic Eagle character Dan Dare.

This collection contains some of Gerry's greatest work on these strips and more. Tight plots, non-stop action and plenty of thrills are here in abundance and highlight why 2000 AD became the stand out comic title in Britain.
One of the most prolific writers in the comic’s history, Gerry Finley-Day holds a special place in many 2000 AD fans’ hearts as the creator of classics like Rogue Trooper, Fiends of the Eastern Front and The V.C.s, as well as Harry 20 on the High Rock and Ant Wars.

A keen “ideas man”, Finley-Day’s concepts of the horrors future warfare had in store were key to both Rogue and The V.C.s’ continuing popularity, ensuring that their recent return to the Galaxy’s Greatest Comic was well-received.

Finley-Day also scripted episodes of Judge Dredd and Dan Dare, and co-scripted much of Invasion! (and entirely scripted the prequel story, ‘Disaster 1990!’).
What is included with this book?