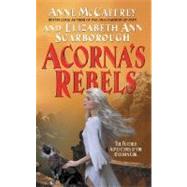 The Unicorn Girl undertakes her most serious mission yet--a journey that will lead her to discover an evil conspiracy that reaches far into space and time and an ancient secret that could lead her to her missing beloved lifemate.
Acorna's Rebels

The mountains were still not right. Oh, the peaks soared majestically enough. Gaali, a huge crest translucent with snow and deep blue glaciers, loomed above the purple-blue cone of Zaami, which nestled between it and the rugged, sharp-edged icy summit of Kaahi, the only one of the three massive slopes ever to have been scaled.

These peaks had an almost mystical significance to Acorna's people, the Linyaari. They were the top of the world, and Our Star's progress from one side of Gaali's peak to the other had once divided a Linyaari day as the rising of moons did on other planets. The sight of the rugged mountains against the horizon had meant home to the Linyaari—until their world was invaded by an alien race, the Khleevi. The Khleevi had destroyed everything in their path, even the highest mountains on Vhiliinyar, the native planet of the Linyaari.

Many of the Linyaari recovery teams working on their ravaged homeworld had recently seen their mountains again, beautiful and whole. Caught up in the alien machinery of a long-buried ancient city there, they had been trapped and snatched into their planet's past. Returning time travelers brought back sketches, notes, specimens, even vids of the peaks, but Acorna could not reconcile any of their images perfectly with the holo program that would form the basis for the re-formation of the peaks.

"You've redone that range twenty times if you've done it once, Princess. Give it a rest," said Jonas Becker, CEO of Becker Interplanetary Recycling and Salvage Enterprises Ltd., and captain of the firm's flag and only ship, the Condor.

"It's as if every person who has seen those mountains has seen different ones, Captain," Acorna said. "No matter how we build them, someone will be disappointed or think there is something we have left out."

"We'll just put all the controversial stuff at the top of the high one, then." He shrugged. "That way if they want to nitpick they'll have to either climb it or land on it to find fault."

"Maybe. But they are already rebuilding our home more slowly than most people truly wish because of Aari and me. I want everything to be just right when each feature of old Vhiliinyar is reinstated."

"You are really something," Becker said, shaking his head. "You look like you haven't finished high school, yet you're trying to push mountain ranges around and tell forests how to grow because you also think you can tell people what to see when they look at them? Give it up, Princess. It wasn't just because of Aari that your people decided to take the more conservative approach to re-terraforming Vhiliinyar. Expense entered into it, and truly owning their home, and all that other stuff Kaalmi Vroniiyi and the Ancestors talked about at the last Council meeting. It's time for you to let go a little. You have to do something besides work and hang out at the time machine in case Aari pops up."

"I do other things!" Acorna said with a little jut of her lower lip. "I go for long walks. I talk with the Ancestors and the Elders. I make notes of how the environment is trying to heal itself from the Khleevi damage."

At that moment a piece of debris flew between them on an ill-tempered breeze blowing through the ancient city. Though the breeze was nothing like the high roaring winds that plagued Vhiliinyar's barren surface these days, it carried blades of ice in it nonetheless. The debris was pounced on and subdued immediately by Becker's first mate, a Makahomian Temple cat Becker called Roadkill, or RK. Being the second in command on a salvage ship, RK was a highly skilled professional when it came to collecting junk. However, in this case, once he had pounced on the object, which turned out to be a crumpled list of specimens collected by aagroni Iirtyi in different eras of Vhiliinyar history, the paper's lack of resistance bored the cat.

Abandoning his prey, RK strolled over to greet Acorna, leaped onto her shoulder, and walked across her chest. Purring madly, he rubbed his face against the tablet she held. She finally released it and rubbed his chops, which had been his master plan all along, she suspected.

Becker continued his own blandishments. "Going for a walk isn't like really going anywhere. You haven't even visited MOO in over six weeks. Hafiz has summoned RK and me to visit him there, and we're about to board the Condor now. Come on with us. Mac would love to see you. Besides, if there's salvage to haul, we'll be shorthanded without Aari. We could really use your help. My back has been acting up lately." The very able-bodied veteran spacefarer rubbed the small of his back and groaned, while watching her from slitted eyes to see if she was looking sympathetic.

She laughed. "Oh, very well, Captain. I take it that you are not employing your acting skills because you wish me to heal your 'bad back,' but because you're so flatteringly desperate for my company, such as it is these days. Let me tell Maati and the others I'm going, leave a few notes for them on how to continue my work here, get some things together, and I'll be right with you."

As soon as they were back in space Acorna realized that Becker had been right to lure her away from the planet. Back on Vhiliinyar, no matter how hard she worked, she always kept one part of her focus on the people around her, secretly waiting for someone to say they'd seen him coming out of the lake or near the time device or ... somewhere.Here on the Condor, with Becker, Mac, and the cat, it was almost like the impossibly recent good old days when they had all been together ...

Excerpted from Acorna's Rebels by Anne McCaffrey, Elizabeth Ann Scarborough
All rights reserved by the original copyright owners. Excerpts are provided for display purposes only and may not be reproduced, reprinted or distributed without the written permission of the publisher.