Aladdin and the Wonderful Lamp 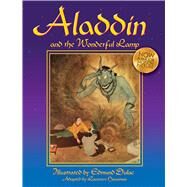 A feckless boy is lured by a wicked magician into a trap but the scheme backfires — the boy, Aladdin, is left with a magical lamp and a genie who showers him with riches. Aladdin's wealth makes him an attractive suitor for the sultan's daughter, but when the evil sorcerer returns to kidnap the bride, the young hero must rescue his princess or die trying.
This classic retelling of the ever-popular Middle Eastern folktale has entranced readers for over a century. Originally published in 1914 as part of Sindbad the Sailor and Other Stories from The Arabian Nights, this beautiful version by Laurence Housman features eight full-color images by Edmund Dulac, one of the era's most famous illustrators.
French-born artist Edmund Dulac (1882–1953) achieved prominence during the Golden Age of Illustration. His work encompasses a wide variety of themes and styles, although he preferred to work in watercolors and remains best known for his imaginative illustrations for fairy tales and other children's books. Dulac's interest in portraying scenes from Eastern literature is reflected in his illustrations for The Rubàiyàt of Omar Khayyàm, The Arabian Nights, and Sindbad the Sailor.
Laurence Housman (1865–1959) worked as a book designer and illustrator for publisher John Lane and is best known for his work on Christina Rossetti's Goblin Market. Later in his career, he pursued his interest in writing, becoming a successful author and playwright.