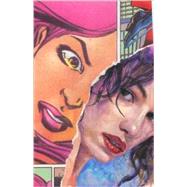 Once upon a time, Jessica Jones was a costumed super-hero, just not a very good one. Her powers were unremarkable compared to the amazing abilities of the costumed icons that populate the Marvel Universe. In a city of Marvels, Jessica Jones never found her niche. Now a chain-smoking, self-destructive alcoholic with a mean inferiority complex, Jones is the owner and sole employee of Alias Investigations - a small, private-investigative firm specializing in super-human cases. In her inaugural arc, Jessica's life immediately becomes expendable when she uncovers the potentially explosive secret of one hero's true identity. But her wit, charm and intelligence just may help her survive through another day. Thrust into the midst of a conspiracy that reaches the highest levels, has Jessica burned too many bridges to turn to old friends for help? Plus: Jessica travels to upstate New York to investigate the disappearance of a teenage girl rumored to be a mutant in a prejudiced small town, goes on a date with the Astonishing Ant-Man, teams up with Jessica Drew, the original Spider-Woman; and confronts the demons of her past! Collects Alias #1-28, What If? Jessica Jones had Joined the Avengers.
What is included with this book?