Alive in Shape and Color 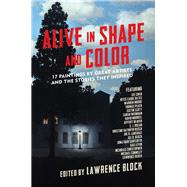 In his brilliant follow-up to In Sunlight or In Shadow, Lawrence Block has gathered together the best talent from popular fiction to produce an anthology as inventive as it is alluring, including Joyce Carol Oates, Lee Child, Michael Connelly, David Morrell, and Jeffery Deaver.

Even before Lawrence Block could rest on his laurels from In Sunlight or In Shadow, a question arose. What would he do for an encore?

Any number of artists have produced evocative work, but none came to mind who could equal Hopper in turning out canvas after canvas. If no single artist could take Hopper’s place, how about a full palette of them? Suppose each author was invited to select a painting from the whole panoply of visual artfFrom the cave drawings at Lascaux to a contemporary abstract canvas on which the paint has barely dried.

And what a dazzling response! The impressive concept includes works inspired by artists ranging from Balthus, Salvador Dali, Hieronymous Bosch, Mokusai, Rodin, Rockwell, Magritte and more, written by such authors as Joyce Carol Oates, Warren Moore, Michael Connelly, S. J. Rozan, Jeffery Deaver, Kristine Kathryn Rusch, Thomas Pluck, Sarah Weinman, David Morrell, Craig Ferguson, Joe R. Lansdale, Jill D. Block, Justin Scott, Jonathan Santlofer, Gail Levin, Nicholas Christopher, and Lee Child, with each story accompanied in color by the work of art that inspired it.
Lawrence Block has been writing award-winning mystery and suspense fiction for half a century. His novels include The Girl With the Deep Blue Eyes, The Burglar Who Counted the Spoons, Hit Me, and A Drop of the Hard Stuff, featuring Matthew Scudder. He's well known for his books for writers, including the classic Telling Lies For Fun & Profit and Write for Your Life, and he has recently published The Crime of Our Lives, a collection of his writings about the mystery genre and its practitioners.