All Eyes on Us 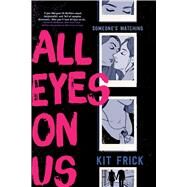 “If you like your YA thrillers smart, suspenseful, and full of complex characters, then you’ll love All Eyes on Us.” —Karen M. McManus, New York Times bestselling author of One of Us Is Lying and Two Can Keep a Secret

Pretty Little Liars meets People Like Us in this “page-ripping psychological thriller” (Kirkus Reviews, starred review) about two teens who find their lives intertwined when an anonymous texter threatens to spill their secrets and uproot their lives.

PRIVATE NUMBER: Wouldn’t you look better without a cheater on your arm?
AMANDA: Who is this?

PRIVATE NUMBER: I’m watching you, Sweetheart.
ROSALIE: Who IS this?

Rosalie Bell is fighting to remain true to herself and her girlfriend—while concealing her identity from her Christian fundamentalist parents. After years spent in and out of conversion “therapy,” her own safety is her top priority. But maintaining a fake, straight relationship is killing her from the inside.

When an anonymous texter ropes Amanda and Rosalie into a bid to take Carter down, the girls become collateral damage—and unlikely allies in a fight to unmask their stalker before Private uproots their lives.

PRIVATE NUMBER: You shouldn’t have ignored me. Now look what you made me do…
Kit Frick is a novelist, poet, and MacDowell fellow from Pittsburgh, Pennsylvania. She studied creative writing at Sarah Lawrence College and received her MFA from Syracuse University. The author of the poetry collection A Small Rising Up in the Lungs and the young adult thrillers See All the Stars, All Eyes on Us, I Killed Zoe Spanos, and Very Bad People, Kit loves a good mystery but has only ever killed her characters. Honest. Visit Kit online at KitFrick.com and on Twitter and Instagram @KitFrick.