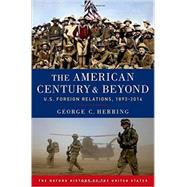 In his last years as president of the United States, an embattled George Washington yearned for a time when his nation would have "the strength of a Giant and there will be none who can make us afraid." At the turn of the twentieth century, the United States seemed poised to achieve a position
of world power beyond what even Washington could have imagined.

In The American Century and Beyond: U.S. Foreign Relations, 1893-2014, the second volume of a new split paperback edition of the award-winning From Colony to Superpower, George C. Herring recounts the rise of the United States from the dawn of what came to be known as the American Century. This
fast-paced narrative tells a story of stunning successes and tragic failures, illuminating the central importance of foreign relations to the existence and survival of the nation. Herring shows how policymakers defined American interests broadly to include territorial expansion, access to growing
markets, and the spread of the "American way of life." He recounts the United States' domination of the Caribbean and Pacific, its decisive involvement in two world wars, and the eventual victory in the half-century Cold War that left it, after the collapse of the Soviet Union, the world's lone
superpower.

But the unipolar moment turned out to be stunningly brief. Since the turn of the twenty-first century, conflicts in Afghanistan and Iraq and the emergence of nations such as Brazil, Russia, India, and China have left the United States in a position that is uncertain at best. A new chapter brings
Herring's sweeping narrative up through the Global War on Terror to the present.

George C. Herring is Alumni Professor of History Emeritus at the University of Kentucky. A leading authority on U.S. foreign relations, he is the former editor of Diplomatic History and a past president of the Society for Historians of American Foreign Relations. He is the author of America's Longest War: The United States and Vietnam, 1950-1975 and LBJ and Vietnam: A Different Kind of War, among other books.