American Cicero Mario Cuomo and the Defense of American Liberalism 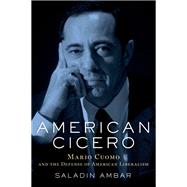 Mario Cuomo was the most important Democratic officeholder during the Reagan era. The three-term governor of New York was also a famously eloquent defender of the Democratic Party's progressive legacy even as conservatives gained political power across the nation. As liberalism's most
powerful and eloquent defender of the New Deal's legacy, he found a wide and receptive audience well beyond his home state of New York. Yet he never ran for president. Why?

Saladin Ambar's American Cicero traces Cuomo's rise from the rough-and-tumble world of New York City politics to liberal champion, and a central question threads throughout the narrative: was he a symbol of liberalism's long decline in twentieth-century American politics, or a prophet in the
wilderness, heralding the rise of a new progressivism? Moving from his youth in an immigrant neighborhood in Queens to his final years in Albany, Ambar argues that Cuomo kept the spent embers of liberalism alive in an era of conservative dominance. Cuomo's voice - buttressed by a string of electoral
victories in New York - provided succor to the liberal faithful. Yet his decision not to run for president arguably hastened the end of his political career: he was voted out of gubernatorial office in 1994 in a nationwide Republican wave.

Ambar's research took him to Italy in search of lingering questions, chiefly why Cuomo never ran for president. He learned of concerns about an assassination attempt - Cuomo's mother had admonished him, "remember what happened to the last Catholic president" - and even proto-"birther" rumors that
Cuomo had been born in Italy. Whatever clinched his decision not to run, Cuomo's impassioned advocacy for liberalism nevertheless had a measurable impact on twenty-first century Democratic progressives, notably Barack Obama. American Cicero promises to not only re-establish Cuomo's central place in
modern American liberalism, but also force readers to reassess liberalism's fortunes following the close of the New Deal era.

Saladin Ambar is Associate Professor of Political Science, Lehigh University, and author of Malcolm X at Oxford Union and How Governors Built the American Presidency.