The American Elections of 2008 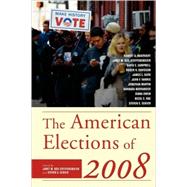 "The American Elections of 2008" assembles leading political scientists and journalists to explain the election results and their implications for America's future. Topics include financing the elections, religion's influence, the media, and how the George W. Bush legacy affected the outcome. The book also explores Congressional behavior in the twenty-first century and discusses how it affected election results in 2008.
What is included with this book?