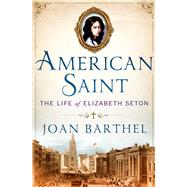 In this riveting biography of Elizabeth Seton critically acclaimed and bestselling author Joan Barthel tells the mesmerizing story of a woman whose life featured wealth and poverty, passion and sorrow, love and loss. Elizabeth was born into a prominent New York City family in 1774. Her father was the chief health officer for the Port of New York and she lived down the block from Alexander Hamilton. She danced at George Washington's sixty-fifth Birthday Ball wearing cream slippers, monogrammed. Catholicism was illegal in New York when she was born; Catholic priests seen in the city were arrested, sometimes hung. When Elizabeth and her wealthy husband Will sailed to Italy in a doomed attempt to cure his tuberculosis, she and her family were quarantined in a damp dungeon. And when Elizabeth later became a Catholic, she was so scorned that people talked of burning down her house. American Saint is the inspiring story of a brave woman who forged the way for the other women who followed and who made a name for herself in a world entirely ruled by men. Elizabeth resisted male clerical control of her religious order, as nuns are doing today, and the publication of her story could not be more timely. Maya Angelou has contributed the foreword.

JOAN BARTHEL is the author of A Death in Canaan, which spent many weeks on the bestseller list and was made into a CBS TV movie that was nominated for an Emmy Award. Following A Death in Canaan, Barthel wrote A Death in California and  collaborated with Rosemary Clooney on Girl Singer. Barthel has written profiles of celebrities for such publications as The New York Times Magazine and The Washington Post Magazine. She lives in St. Louis, Missouri. Visit her Web site at www.joanbarthel.com.