America's Politics A Diverse Country in a Globalizing World 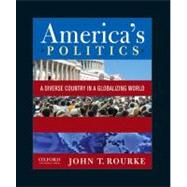 Written by a leading textbook author with a background in American foreign policy and international relations,America's Politicsis the first introductory American government text with a theme of globalization and diversity. "Globalizing the curriculum" has become a mantra throughout APSA and the American university system, and "Demography is destiny" is also resonating widely from coast to coast. Addressing both of these trends, author John T. Rourke weaves them into the story of U.S. national government in a compact, affordable, and student-friendly text. As timely as the stock market ticker yet as time-honored as the American traditions of immigration, revolution, and innovation,America's Politicsis an engaging and pedagogically rich text for American Government courses. FEATURES: * Tells the fascinating "story" of politics while also covering major theoretical political science approaches and controversies * Incorporates unique text boxes and insets: "You Decide," "A World of Difference," and "American Diversity" * Includes opening outlines, closing summaries, highlighted key terms, and glossaries for each chapter

List of Boxes, Tables, and Figures
Preface
Acknowledgments
About the Author

1. You, American Politics, and This Book

Part One. Settings for a Diverse and Global Government
2. The Constitution
3. Federalism
4. Civil Liberties
5. Civil Rights

Notes
Scholars Cited
Index
What is included with this book?