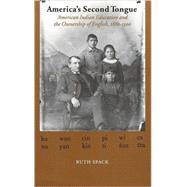 This remarkable study sheds new light on American Indian mission, reservation, and boarding school experiences by examining the implementation of English-language instruction and its effects on Native students. A federally mandated system of English-only instruction played a significant role in dislocating Native people from their traditional ways of life in the late nineteenth and early twentieth centuries. The effect of this policy, however, was more than another instance of cultural loss-English was transformed by and even empowered many Native students.Drawing on archival documents, autobiography, fiction, and English as a Second Language theory and practice,America's Second Tonguetraces the shifting ownership of English as the language was transferred from one population to another and its uses were transformed by Native students, teachers, and writers. How was the English language taught to Native students, and how did they variably reproduce, resist, and manipulate this new way of speaking, writing, and thinking? The perspectives and voices of government officials, missionaries, European American and Native teachers, and the students themselves reveal the rationale for the policy, how it was implemented in curricula, and how students from dozens of different Native cultures reacted differently to being forced to communicate orally and in writing through a uniform foreign language.
Ruth Spack is an associate professor of English and the director of English for Speakers of Other Languages Programs at Bentley College.
What is included with this book?