Anarchy in the Ashes 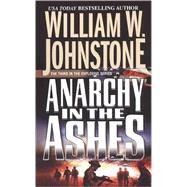 In the aftermath of germ and nuclear warfare, of plague and pillage and bloody anarchy, the fate of a divided world hangs by a slender thread. Ben Raines and his SUSA Rebels are on one side and the enemies of freedom are on the other. But Ben Raines has sworn to make the dream of government by the people a reality. Until ruthless mercenary Sam Hartline puts together a mammoth army of invading Russians that could not only decimate Raines's Rebel forces but forever crush the dream that was--and is--America.