The Antislavery Debate: Capitalism and Abolitionism As a Problem in Historical Interpretation 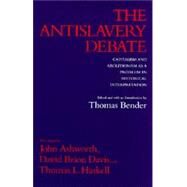 This volume brings together one of the most provocative debates among historians in recent years. The center of controversy is the emergence of the antislavery movement in the United States and Britain and the relation of capitalism to this development. The essays delve beyond these issues, however, to raise a deeper question of historical interpretation: What are the relations between consciousness, moral action, and social change? The debate illustrates that concepts common in historical practice are not so stable as we have thought them to be. It is about concepts as much as evidence, about the need for clarity in using the tools of contemporary historical practice. The participating historians are scholars of great distinction. Beginning with an essay published in theAmerican Historical Review(AHR), Thomas L. Haskell challenged the interpretive framework of David Brion Davis's celebrated study,The Problem of Slavery in the Age of Revolution. TheAHRsubsequently published responses by Davis and by John Ashworth, as well as a rejoinder by Haskell. TheAHRessays and the relevant portions of Davis's book are reprinted here. In addition, there are two new essays by Davis and Ashworth and a general consideration of the subject by Thomas Bender. This is a highly disciplined, insightful presentation of a major controversy in historical interpretation that will expand the debate into new realms.
What is included with this book?