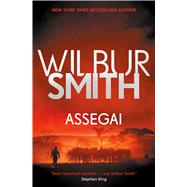 A Courtney series adventure - Book 1 in the Assegai sequence

For King and Country. No matter the cost. With the backing of his uncle, General Penrod Ballantyne, young Leon Courtney joins the King's Rifles of Nairobi. When he becomes discouraged by the dishonesty of army life, his uncle recruits him for a special mission - spying on the Germans in East Africa, whom the General suspects are preparing for the Kaiser's war. Posing as a professional game hunter Leon is tasked with gathering information on one is his clients, a wealthy industrialist Otto Von Meerbach. Leon finds himself falling for von Meerbach's beautiful mistress but never forgets that his real mission is to destroy the enemy. But how easy will he find his task when his true enemy is closer to home than Leon ever expected?
Wilbur Smith is a global phenomenon: a distinguished author with a large and established readership built up over fifty-five years of writing with sales of over 120 million novels worldwide. Born in Central Africa in 1933, Wilbur became a full-time writer in 1964 following the success of When the Lion Feeds, and has since published over thirty novels, including the Courtney series, the Ballantyne series, the Egyptian series, the Hector Cross series and many successful standalone novels, all meticulously researched on his numerous expeditions worldwide. His books have now been translated into twenty-six languages. The establishment of the Wilbur & Niso Smith Foundation in 2015 cemented Wilbur's passion for empowering writers, promoting literacy and advancing adventure writing as a genre. The foundation's flagship programme is the Wilbur Smith Adventure Writing Prize. For all the latest information on Wilbur visit www.wilbursmithbooks.com or facebook.com/WilburSmith