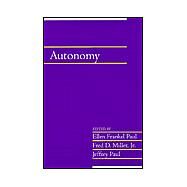 A central idea in moral and political philosophy, 'autonomy' is generally understood as some form of self-governance or self-direction. Certain Stoics, modern philosophers such as Spinoza, and most importantly, Immanuel Kant, are among the great philosophers who have offered important insights on the concept. Some theorists analyze autonomy in terms of the self being moved by its higher-order desires. Others argue that autonomy must be understood in terms of acting from reason or from a sense of moral duty independent of the passions. Autonomy seems closely related to the notion of freedom, but in what sense: freedom from coercion, freedom from psychological constraints, or freedom from material necessity? Various approaches to these and similar questions yield different implications for public policy. Is capitalism, social democracy or socialism more favorable to autonomy? The essays in this volume address these important questions.
What is included with this book?