Azaleas : A Book of Poems 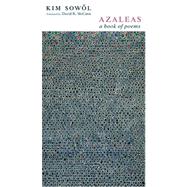 Available for the first time in English, Azaleasis a captivating collection of poems by a master of the early Korean modernist style. Published in 1925, Azaleasis the only collection Kim Sowol (1902-1934) produced during his brief life, yet he remains one of Korea's most beloved and well-known poets. His work is a delightful and sophisticated blend of the images, tonalities, and rhythms of traditional Korean folk songs with surprisingly modern forms and themes. Sowol is also known for his unique and sometimes unsettling perspective, expressed through loneliness, longing, and a creative use of dream imagery-a reflection of Sowol's engagement with French Symbolist poetry. Azaleasrecounts the journey of a young Korean as he travels from the northern P'yongyang area near to the cosmopolitan capital of Seoul. Told through an array of voices, the poems describe the young man's actions as he leaves home, his experiences as a student and writer in Seoul, and his return north. Although considered a landmark of Korean literature, Azaleasspeaks to readers from all cultures. An essay by Sow?o's mentor, the poet Kim Ok, concludes the collection and provides vital insight into Sowol's work and life. This elegant translation by David R. McCann, an expert on modern Korean poetry, maintains the immediacy and richness of Sowol's work and shares with English-language readers the quiet beauty of a poet who continues to cast a powerful spell on generations of Korean readers., reviewing a previous edition or volume
David R. McCann is Korea Foundation Professor of Korean Literature at Harvard University