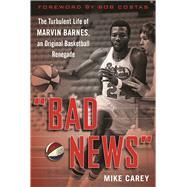 Marvin “Bad News” Barnes was considered a future Hall of Fame basketball player before he even graduated from college. A standout at Providence College, where he averaged 20.7 points and 17.9 rebounds per game, he was an All-American with the world at his fingertips.

Although Barnes enjoyed two highly successful years in the American Basketball Association with the Spirits of St. Louis (winning Rookie of the Year honors and twice being named an All-Star), his career fizzled in the NBA as he wore out his welcome with the Detroit Pistons, Buffalo Braves, Boston Celtics, and San Diego Clippers in four years. His immaturity, as well as a chronic losing battle with drugs and alcohol, turned a potential superstar into a has-been by 1979. By then, his swagger was gone. So too was his game.

Written by Mike Carey, who opened his house to Barnes later in his life, this is the story of a supremely gifted athlete whose self-destructive nature led to him living on the mean streets of East San Diego for three years as a panhandler and pimp. Eventually he would serve a total of five years in prison for various felony charges, including the sale of cocaine.
Throughout his life, every time it appeared that “Bad News” had turned the corner, his demons reappeared and succeeded in luring him back into becoming a conniving dope fiend.

On September 8, 2014, Barnes finally hit rock bottom, passing away due to acute cocaine and heroin intoxication. He was sixty-two years old.

With stories and quotes from Julius Erving, Bill Walton, Larry Brown, Mike D’Antoni, and many others who crossed paths with Barnes, as well as a foreword from former Spirits announcer Bob Costas, “Bad News” is the story of a squandered talent who could never defeat his inner demons.
Mike Carey worked nineteen years at the Boston Herald, serving as news editor, then sports editor, and finally as Celtics beat writer during the Larry Bird era. In addition, he wrote the annual NBA draft preview for The Sporting News and was a regular contributor to Basketball Digest and Hoop Magazine. He is also the author of several books on basketball, including Boston Celtics: Where Have You Gone?

Bob Costas is a long-time broadcaster who has covered every major American sporting event throughout his career, as well as the winter and summer Olympics Games. His first job out of college was as the play-by-play man for the Spirits of St. Louis of the American Basketball Association (ABA), where he first met Marvin Barnes. Over the course of his career he has won twenty-six Emmy awards and has been voted Sports Broadcaster of the Year a record eight times. In 2012, Costas was inducted into the National Sportscasters and Sportswriters Association Hall of Fame.