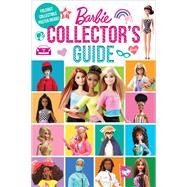 With Barbie, you can be anything! Discover all of the careers Barbie has had in this fun book with a double-sided, collectible poster!

Barbie has had many different careers over the years—from a surgeon to an astronaut—proving that anything is possible for you and Barbie! Packed with countless interesting Barbie-related facts and including a collectible, double-sided poster, this book is full of non-stop fun and imagination. Here are just a few of the amazing things you will learn: Barbie fans of all ages will love discovering—and rediscovering—Barbie dolls from the last 60 years!
What is included with this book?