The Battle for the Dragon's Temple 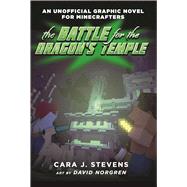 For fans of Minecraft and graphic novels, an epic, full-color adventure—Phoenix must travel to the End and defeat the wicked Defender!

This full-color, graphic novel adventure, with over 750 color images, is created especially for readers who love the fight of good vs. evil, magical academies like Hogwarts in the Harry Potter saga, and games like Minecraft, Terraria, and Pokemon GO.

With the help of her friends, Phoenix has finally solved the mystery of where she came from! But unraveling the truth about her past only leads to more questions, like why her parents gave their lives to defeat the powerful Ender Dragon.

Determined to finish what her parents started, and unaware that an old enemy haunts her tracks, Phoenix sets out on her latest adventure. Clue after clue leads Phoenix, Xander, and T.H. closer to the darkness of the End. What awaits them there is their greatest battle yet—and perhaps the key to Phoenix’s true destiny.

Fans of Minecraft won’t want to miss this riveting addition to the series that began with Quest for the Golden Apple!
Cara J. Stevens has written many other books for kids, including the novel Dragon School. When she’s not writing or hanging out at the beach, she can be found playing pinball, Wii U, and classic Atari games. Cara lives in Old Greenwich, Connecticut with her husband, two children, and a loud, fluffy dog named Oliver.

David Norgren is a software developer and animation enthusiast. Some of David’s creations include Mine-imator, an easy-to-use movie maker for the sandbox game Minecraft. Through the years, it has sparked the imaginations of thousands of young and old Minecraft fans and helped them enter the realm of animation.