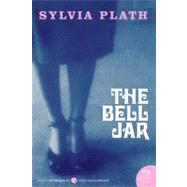 The Bell Jar chronicles the crack-up of Esther Greenwood: brilliant, beautiful, enormously talented, and successful, but slowly going under -- maybe for the last time. Sylvia Plath masterfully draws the reader into Esther's breakdown with such intensity that Esther's insanity becomes completely real and even rational, as probable and accessible an experience as going to the movies. Such deep penetration into the dark and harrowing corners of the psyche is an extraordinary accomplishment and has made The Bell Jar a haunting American classic.

This P.S. edition features an extra 16 pages of insights into the book, including author interviews, recommended reading, and more.

"A fine novel, as bitter and remorseless as her last poems -- the kind of book Salinger's Fanny might have written about herself ten years later, if she had spent those ten years in Hell." - Robert Scholes, The New York Times Book Review.

"By turns funny, harrowing, crude, ardent and artless. Its most notable quality is an astonishing immediacy, like a series of snapshots taken at high noon." - Time.

"A special poignance... a special force, a humbling power, because it shows the vulnerability of people of hope and good will." - Newsweek.

It was a queer, sultry summer, the summer they electrocuted the Rosenbergs, and I didn't know what I was doing in New York. I'm stupid about executions. The idea of being electrocuted makes me sick, and that's all there was to read about in the papers--goggle-eyed headlines staring up at me on every street corner and at the fusty, peanut-smelling mouth of every subway. It had nothing to do with me, but I couldn't help wondering what it would be like, being burned alive all along your nerves.

I thought it must be the worst thing in the world.

New York was bad enough. By nine in the morning the fake, country-wet freshness that somehow seeped in overnight evaporated like the tail end of a sweet dream. Mirage-gray at the bottom of their granite canyons, the hot streets wavered in the sun, the car tops sizzled and glittered, and the dry, cindery dust blew into my eyes and down my throat.

I kept hearing about the Rosenbergs over the radio and at the office till I couldn't get them out of my mind. It was like the first time I saw a cadaver. For weeks afterward, the cadaver's head--or what there was left of it--floated up behind my eggs and bacon at breakfast and behind the face of Buddy Willard, who was responsible for my seeing it in the first place, and pretty soon I felt as though I were carrying that cadaver's head around with me on a string, like some black, noseless balloon stinking of vinegar.

(I knew something was wrong with me that summer, because all I could think about was the Rosenbergs and how stupid I'd been to buy all those uncomfortable, expensive clothes, hanging limp as fish in my closet, and how all the little successes I'd totted up so happily at college fizzled to nothing outside the slick marble and plate-glass fronts along Madison Avenue.)

I was supposed to be having the time of my life.

I was supposed to be the envy of thousands of other college girls just like me all over America who wanted nothing more than to be tripping about in those same size-seven patent leather shoes I'd bought in Bloomingdale's one lunch hour with a black patent leather belt and black patent leather pocketbook to match. And when my picture came out in the magazine the twelve of us were working on--drinking martinis in a skimpy, imitation silver-lame bodice stuck on to a big, fat cloud of white tulle, on some Starlight Roof, in the company of several anonymous young men with all-American bone structures hired or loaned for the occasion--everybody would think I must be having a real whirl.

Look what can happen in this country, they'd say. A girl lives in some out-of-the-way town for nineteen years, so poor she can't afford a magazine, and then she gets a scholarship to college and wins a prize here and a prize there and ends up steering New York like her own private car.

Only I wasn't steering anything, not even myself. I just bumped from my hotel to work and to parties and from parties to my hotel and back to work like a numb trolleybus. I guess I should have been excited the way most of the other girls were, but I couldn't get myself to react. (I felt very still and very empty, the way the eye of a tornado must feel, moving dully along in the middle of the surrounding hullabaloo.)

There were twelve of us at the hotel.

We had all won a fashion magazine contest, by writing essays and stories and poems and fashion blurbs, and as prizes they gave us jobs in New York for a month, expenses paid, and piles and piles of free bonuses, like ballet tickets and passes to fashion shows and hair stylings at a famous expensive salon and chances to meet successful people in the field of our desire and advice about what to do with our particular complexions.

I still have the makeup kit they gave me, fitted out for a person with brown eyes and brown hair: an oblong of brown mascara with a tiny brush, and a round basin of blue eye-shadow just big enough to dab the tip of your finger in, and three lipsticks ranging from red to pink, all cased in the same little gilt box with a mirror on one side. I also have a white plastic sunglasses case with colored shells and sequins and a green plastic starfish sewed onto it.

I realized we kept piling up these presents because it was as good as free advertising for the firms involved, but I couldn't be cynical. I got such a kick out of all those free gifts showering on to us. For a long time afterward I hid them away, but later, when I was all right again, I brought them out, and I still have them around the house. I use the lipsticks now and then, and last week I cut the plastic starfish off the sunglasses case for the baby to play with.

So there were twelve of us at the hotel, in the same wing on the same floor in single rooms, one after the other, and it reminded me of my dormitory at college. It wasn't a proper hotel--I mean a hotel where there are both men and women mixed about here and there on the same floor.

This hotel--the Amazon--was for women only, and they were mostly girls my age with wealthy parents who wanted to be sure their daughters would be living where men couldn't get at them and deceive them; and they were all going to posh secretarial schools like Katy Gibbs, where they had to wear hats and stockings and gloves to class, or they had just graduated from places like Katy Gibbs and were secretaries to executives and junior executives and simply hanging around in New York waiting to get married to some career man or other.

These girls looked awfully bored to me. I saw them on the sunroof, yawning and painting their nails and trying to keep up their Bermuda tans, and they seemed bored as hell. I talked with one of them, and she was bored with yachts and bored with flying around in airplanes and bored with skiing in Switzerland at Christmas and bored with the men in Brazil.

Girls like that make me sick. I'm so jealous I can't speak. Nineteen years, and I hadn't been out of New England except for this trip to New York. It was my first big chance, but here I was, sitting back and letting it run through my fingers like so much water.

I guess one of my troubles was Doreen.

I'd never known a girl like Doreen before. Doreen came from a society girls' college down South and had bright white hair standing out in a cotton candy fluff round her head and blue eyes like transparent agate marbles, hard and polished and just about indestructible, and a mouth set in a sort of perpetual sneer. I don't mean a nasty sneer, but an amused, mysterious sneer, as if all the people around her were pretty silly and she could tell some good jokes on them if she wanted to.

Doreen singled me out right away. She made me feel I was that much sharper than the others, and she really was wonderfully funny. She used to sit next to me at the conference table, and when the visiting celebrities were talking she'd whisper witty sarcastic remarks to me under her breath.

Her college was so fashion conscious, she said, that all the girls had pocketbook covers made out of the same material as their dresses, so each time they changed their clothes they had a matching pocketbook. This kind of detail impressed me. It suggested a whole life of marvelous, elaborate decadence that attracted me like a magnet.

The only thing Doreen ever bawled me out about was bothering to get my assignments in by a deadline.

"What are you sweating over that for?" Doreen lounged on my bed in a peach silk dressing gown, filing her long, nicotine-yellow nails with an emery board, while I typed up the draft of an interview with a best-selling novelist.

That was another thing--the rest of us had starched cotton summer nighties and quilted housecoats, or maybe terry-cloth robes that doubled as beachcoats, but Doreen wore these full-length nylon and lace jobs you could half see through, and dressing gowns the color of skin, that stuck to her by some kind of electricity. She had an interesting, slightly sweaty smell that reminded me of those scallopy leaves of sweet fern you break off and crush between your fingers for the musk of them.

"You know old Jay Cee won't give a damn if that story's in tomorrow or Monday." Doreen lit a cigarette and let the smoke flare slowly from her nostrils so her eyes were veiled. "Jay Cee's ugly as sin," Doreen went on coolly. "I bet that old husband of hers turns out all the lights before he gets near her or he'd puke otherwise."

Jay Cee was my boss, and I liked her a lot, in spite of what Doreen said. She wasn't one of the fashion magazine gushers with fake eyelashes and giddy jewelry. Jay Cee had brains, so her plug-ugly looks didn't seem to matter. She read a couple of languages and knew all the quality writers in the business.

I tried to imagine Jay Cee out of her strict office suit and luncheon-duty hat and in bed with her fat husband, but I just couldn't do it. I always had a terribly hard time trying to imagine people in bed together.

Somebody tapped at the door.

The Bell Jar. Copyright © by Sylvia Plath. Reprinted by permission of HarperCollins Publishers, Inc. All rights reserved. Available now wherever books are sold.

Excerpted from The Bell Jar by Sylvia Plath
All rights reserved by the original copyright owners. Excerpts are provided for display purposes only and may not be reproduced, reprinted or distributed without the written permission of the publisher.