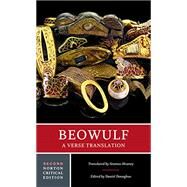 This Norton Critical Edition includes:  Nobel Laureate Seamus Heaneys poetic translation of the great Anglo-Saxon epicwinner of the Whitbread Prizealong with his translators introduction.  Detailed explanatory annotations and an introduction to Old English language and prosody by Daniel Donoghue.  More than two dozen visuals, including, new to the Second Edition, a fine selection of objects from the Staffordshire Hoard.  A rich array of Anglo-Saxon and early northern civilization materials, providing student readers with Beowulfs cultural and historical context.  Nine critical interpretations, three of them new to the Second Edition.  A glossary of personal names and a selected bibliography.About the Series Read by more than 12 million students over fifty-five years, Norton Critical Editions set the standard for apparatus that is right for undergraduate readers. The three-part formatannotated text, contexts, and criticismhelps students to better understand, analyze, and appreciate the literature, while opening a wide range of teaching possibilities for instructors. Whether in print or in digital format, Norton Critical Editions provide all the resources students need.
What is included with this book?