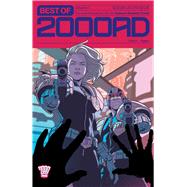 "A masterclass in pulling in new readers" - The Comics Beat

"A slab of pop...a great place to start to explore this huge swathe of British comics" - Kieron Gillen (Die, Once & Future, Eternals)

Best of 2000 AD is a landmark series from the cult comic, bursting with our greatest stories for a new generation of readers.

Every Best of 2000 AD contains a mix of modern classics and gems from the vault. In each edition you'll find an explosive new Judge Dredd adventure, fresh essays by prominent popular culture writers, a graphic novel-length feature presentation by global legends and a vintage Dredd case.

In this volume: Judge Dredd battles Mutie Block anarchy; Halo Jones escapes in Alan Moore’s first masterpiece; humanity is on the Brink in the space murder mystery from Dan Abnett and INJ Culbard; Judge Anderson takes centre stage in the search for Shamballa.

Boasting brand new covers from an all-star line-up of artists including Jamie McKelvie (The Wicked + The Divine) and Karl Kerschl (Gotham Academy) with designer Tom Muller (X-Men), Best of 2000 AD is the essential gateway into the Galaxy’s Greatest Comic.
Perhaps the most widely respected comic writer of the modern era, Alan Moore’s contribution to the comics world is incalculable. Creator of some of 2000 AD’s most popular series, including Abelard Snazz, The Ballad of Halo Jones, D.R. & Quinch and Skizz, he has also worked on A.B.C. Warriors, Ro-Busters, Rogue Trooper, Ro-Jaws’ Robo-Tales, Tharg the Mighty, Time Twisters and several one-off strips. Outside of the Galaxy’s Greatest Comic, Moore is best known for his work on the classic Watchmen, which redefined the superhero genre in 1986, but this is simply touching the surface of a career which has included 1963, A1’s Warpsmiths, Bojeffries Saga and Maxwell the Magic Cat, AARGH!, Batman, Big Numbers, Brought to Light, Captain Britain, Deathblow, Flesh and Bones, From Hell, Glory, Green Lantern Corps, Lost Girls, Miracleman, A Small Killing, Snakes and Ladders, Spawn, Supreme, Swamp Thing, Superman , V For Vendetta, WildC.A.T.S. and Youngblood. Moore is now owner and chief writer of the America’s Best Comics line, distributed by WildStorm, and including Promethea, Tom Strong, Tomorrow Stories, Top Ten and The League of Extraordinary Gentlemen, which has been made into a major Hollywood movie.

John Wagner has been scripting for 2000 AD for more years than he cares to remember. His creations include Judge Dredd, Strontium Dog, Ace Trucking, Al’s Baby, Button Man and Mean Machine. Outside of 2000 AD his credits include Star Wars, Lobo, The Punisher and the critically acclaimed A History of Violence.

Alan Davis is one of the most respected pencillers currently working in the comics industry. Debuting in 2000 AD with the space-based prison drama Harry 20 on the High Rock, he followed with the immortal D.R. and Quinch, which remains one of the Galaxy’s Greatest’s most popular series. Davis also contributed to short stories and Judge Dredd, before heading for America and almost instant acclaim. His US career has included Avengers, Batman and the Outsiders, Captain Britain, ClanDestine, Detective Comics, Excalibur, JLA, Killraven, Miracleman, Star Wars and X-Men. He has recently taken up the reins on Uncanny X-Men.

Kev Walker is the co-creator of Badlands and The Balls Brothers, and has also provided artwork for Dan Dare, Judge Dredd, Future Shocks, Harlem Heroes, Mercy Heights, Rogue Trooper, Time Twisters and Tor Cyan. For the Judge Dredd Megazine, he wrote The Inspectre and has illustrated Judge Anderson, Mean Machine and Wynter. Walker has recently finished an acclaimed run on DC’s L.E.G.I.O.N. and has pencilled Marvel Comics’ The Eternal.

Dan Abnett is a seven-times New York Times bestselling author and an award-winning comic book writer. He has written over fifty novels, including the acclaimed Gaunt’s Ghosts series, the Eisenhorn and Ravenor trilogies, volumes of the million-selling Horus Heresy series, The Silent Stars Go By (Doctor Who), Rocket Raccoon and Groot: Steal the Galaxy, The Avengers: Everybody Wants To Rule The World, The Wield, Triumff: Her Majesty’s Hero, and Embedded. In comics, he is known for his work on The Legion of Super-Heroes, Aquaman, The Titans, Nova, Wild’s End, and The New Deadwardians. His 2008 run on The Guardians of the Galaxy for Marvel formed the inspiration for the blockbuster movie. A regular contributor to the UK’s long-running 2000 AD, he is the creator of series including Grey Area, Lawless, Brink, Kingdom and the classic Sinister Dexter. He has also written extensively for the games industry, including Shadow of Mordor and Alien:Isolation. Dan lives and works in the UK. Follow him on Twitter @VincentAbnett

I.N.J. Culbard is an award-winning artist and writer. He has had work published by SelfMadeHero, Dark Horse comics, Vertigo and BOOM! Studios. He first started working with Ian Edginton on adaptations for SelfMadeHero of The Picture of Dorian Gray, The Hound of the Baskervilles, A Study in Scarlet, The Sign of the Four, and The Valley of Fear. He has also worked with Dan Abnett on original series such as The New Deadwardians (Vertigo), Dark Ages (Dark Horse Comics), and Wild’s End (BOOM! Studios). And lastly he has worked with Chris Lackey and Chad Fifer on the original graphic novel, Deadbeats (SelfMadeHero). He has produced a number of his own adaptations for SelfMadeHero including The Case of Charles Dexter Ward, The Shadow Out of Time, The Dream-Quest of Unknown Kadath, At the Mountains of Madness and his first solo original graphic novel, Celeste.

One of 2000 AD’s best-loved and most honoured artists, Ian Gibson is responsible for the co-creation of The Ballad of Halo Jones (with Alan Moore), and created Bella Bagley, an unfortunate character in Judge Dredd’s world who fell head-over-heels in love with ‘Old Stoney Face’ himself! His work outside the Galaxy’s Greatest Comic includes Chronicles of Genghis Grimtoad, Star Wars: Boba Fett, X-Men Unlimited, plus the designs for the TV series Reboot.

With over 300 2000 AD stories to his name – not to mention over 250 Daily Star Judge Dredd strips – Alan Grant’s prolific creative record speaks for itself. Outside the Galaxy’s Greatest Comic, Grant is well-known to Batman fans following a lengthy run on various incarnations of the title. More recently he has adapted Robert Louis Stevenson’s classic novels Kidnapped and Doctor Jekyll and Mr Hyde in Graphic Novel format with artist Cam Kennedy.
What is included with this book?