The Best Horror of the Year 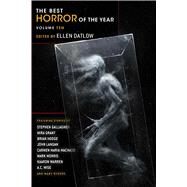 For more than three decades, award-winning editor and anthologist Ellen Datlow has had her finger on the pulse of the latest and most terrifying in horror writing. This edition includes award-winning and critically acclaimed authors Mark Morris, Kaaron Warren, John Langan, Carole Johnstone, Brian Hodge, and others.

A group of mountain climbers, caught in the dark, fights to survive their descent; An American band finds more than they bargained for in Mexico while scouting remote locations for a photo shoot; A young student’s exploration into the origins of a mysterious song leads him on a winding, dangerous path through the US’s deep south; A group of kids scaring each other with ghost stories discovers alarming consequences.

The Best Horror of the Year showcases the previous year’s best offerings in horror short fiction. Night Shade Books is proud to present the tenth volume in this annual series, a new collection of stories to keep you up at night. It includes:
Ellen Datlow has been editing science fiction, fantasy, and horror short fiction for more than thirty years. She was the fiction editor of Omni magazine and Sci Fiction and has edited more than fifty anthologies. Datlow has also won lifetime achievement awards from three prominent genre organizations, and currently acquires short fiction for Tor.com.