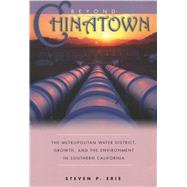 As urban growth outstrips water supplies, how can the global challenge of providing "liquid gold" be met? Mixing history and policy analysis, Steven Erie tells the compelling story of the Metropolitan Water District of Southern California (MWD)--one of the world's largest and most important public water agencies--and its role in building the world's 8th largest economy in a semi-desert. No tawdry tale of secret backroom conspiracies--as depicted in the famed film noirChinatown--this fresh telling concerns an unheralded regional institution, its entrepreneurial public leadership, and pioneering policymaking. Using untapped primary sources, the author re-examines this great regional experiment from its obscure 1920s-era origins, through the Colorado River Aqueduct and State Water Projects, to today's daunting mission of drought management, water quality, environmental stewardship, and post-9/11 supply security. A key focus is MWD's navigation of recent epic water battles: San Diego's combative quest for water independence from MWD and L.A.; lingering conflicts over the Colorado River and northern California's fragile Bay-Delta ecosystem; and the myriad challenges posed by water markets, privatization, and water transfers. Facing unprecedented challenges, MWD is devising innovative formulas to sustain this improbable desert civilization.Beyond Chinatownconcludes by considering MWD's Integrated Resources Plan as a global model for water-resources planning and management, water supply diversification and reliability, affordability, and environmental sustainability.Chinatown's seductive mythologies have obscured MWD's authentic, instructive history and lessons. Praise for Steve Erie's previous book,Globalizing L.A.: "This book is a must-read for anyone interested in the politics of Western cities, the politics of urban development, and especially the future politics of cities that are likely to be contenders in the increasingly competitive arena of global trade. . . . Erie's analysis will forever direct us to look first at certain public agencies to begin to understand larger patterns of economic growth in any metropolitan area."--Journal of Urban Affairs "[A] fascinating history of the Los Angeles region's great assets and the forces that drove their development. . . . One hundred years ago, it was improbable that the Los Angeles region would become the 10th largest economy in the world. InGlobalizing L.A., Erie explains how that happened and then, fingers crossed, offers lessons on how California's largest and most diverse city and region can keep playing a leading role."--Los Angeles Times "Referencing an impressive body of recent academic research, Erie argues that world-class seaport and airport facilities confer substantial economic advantages and more facilitating links between local businesses and the global economy."--The Sacramento Bee "Erie has built a potent political-economy of urban development that recognizes the crucial role of the public sector in mediating globalizing processes . . . and this is a valuable lesson for academics, dockworkers, community developers, and environmental activists alike."--Economic Geography
Steven P. Erie is Professor of Political Science and Director of the Urban Studies and Planning Program at the University of California, San Diego. His previous books include Globalizing L.A.: Trade, Infrastructure, and Regional Development (Stanford University Press, 2004) and Rainbow’s End: Irish Americans and the Dilemmas of Urban Machine Politics (1990).
What is included with this book?