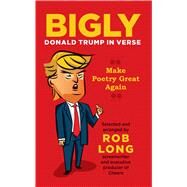 "Mirth, with thee I mean to live."—John Milton

"My whole life is about winning."—Donald Trump

Call It Kobe
They're loaded, loaded with cars.
So they send millions of cars over here.
We sell them beef—beef.
They don't want it.
Half the time they send it back.
They want to send it back.
The farmers over there don't want it.
So we take it back.
That's not good beef
By the time you get it back.
I said the other day—No, no, I say it's aged;
Now they call it Kobe beef
And we sell it for more money.
—September 25, 2015, remarks at Values Voters Summit, discussing trade with China

Table At Le Cirque
I know one man in particular.
He's one of the most successful men in New York,
And he couldn't get a table at a restaurant.
He's worth maybe four or five hundred million dollars,
And he's standing at Le Cirque or one of them
And he couldn't get a table.
So I see him standing there and he's a little embarrassed
And he says, "Don, could you help me get a table?"
So I got him a table.
So he calls the next day and I said,
"No one knows you, you're very successful,"
And he says, "No, no no, I like to keep a low profile."
That's great. But in the meantime
He can't get a table in a restaurant.
—November 11, 1984, interview with the Washington Post
How Do I Back Thee?
I want to just let you know,
I am so behind you.
And I know maybe sometimes
You haven't gotten the backing that you've wanted,
And you're going to get so much backing.
Maybe you're going to say,
Please don't give us so much backing. Mr. President,
Please, We don't need that much backing.
But you're going to have that.
—January 21, 2017, speech at CIA headquarters Langley, Virginia

A hilarious collection of Trump quotes arranged as poetry!

"Poets, wrote Shelley, are 'the unacknowledged legislators of the world.' Big deal. But now for the first time ever a poet is the Leader of the Free World, and he's even more totally unacknowledged—by Democrats, the media, Lena Dunham, Deep State leakers, and other losers. This superb collection of winning verse, brilliantly edited by Rob Long, spans the decades from the early 'Table at Le Cirque' to my personal favorite 'The Mantle of Anger.' With this dazzling anthology, bitter fake-news hacks for whom Trump is beyond reason will have to admit that he's also beyond rhyme (except for page 74)." —MARK STEYN, bestselling author of America Alone, After America, and The Undocumented Mark Steyn

"This book pleased me so much, I culturally appropriated Haiku to contribute to the cover." — MILO YIANNOPOULOS

"More lyrical than Walt Whitman, pithier than Robert Frost—and making a heck of a lot more sense than Emily Dickinson, this book should be required reading for every Literature major on campus."—JAMES DELINGPOLE, columnist at Breitbart.com and The Spectator and author of 365 Ways to Drive a Liberal Crazy and The Little Green Book of Eco-Fascism

Bigly is hilarious compilation of memorable quotes from President Donald Trump arranged as poetry that will have the president's fiercest supporters and harshest critics asking the same question: Can a president appoint himself Poet Laureate? Divided into sections on Life, Love, Beauty, and Death—and including a dedicatory haiku by Milo Yiannopoulos, a foreword by How to Lose Friends and Alienate People author Toby Young, and poignant editor's notes that reveal the hidden meaning in Trump's expert verse—Bigly is a must-have for political junkies who've been following President Donald Trump's unconventional speeches, interviews, complaints, jokes, quips, and witticisms.