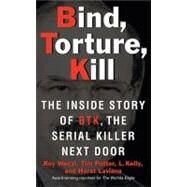 For thirty-one years, a monster terrorized the residents of Wichita, Kansas. A bloodthirsty serial killer, self-named "BTK"-for "bind them, torture them, kill them"-he slaughtered men, women, and children alike, eluding the police for decades while bragging of his grisly exploits to the media. The nation was shocked when the fiend who was finally apprehended turned out to be Dennis Rader-a friendly neighbor . . . a devoted husband . . . a helpful Boy Scout dad . . . the respected president of his church.Written by four award-winning crime reporters who covered the story for more than twenty years, Bind, Torture, Kill is the most intimate and complete account of the BTK nightmare told by the people who were there from the beginning. With newly released documents, evidence, and information-and with the full cooperation, for the very first time, of the Wichita Police Department's BTK Task Force-the authors have put all the pieces of the grisly puzzle into place, thanks to their unparalleled access to the families of the killer and his victims.
Bind, Torture, Kill
The Inside Story of BTK, the Serial Killer Next Door

Her name was Josie Otero. She was eleven years old and wore glasses and wrote poetry and drew pictures and worried about her looks. She had started wearing a bra and growing her hair out; it fell so thick around her head and throat that the man with the gun would soon have a hard time tying the cloth to keep the gag stuffed in her mouth.

As Josie woke up that morning, the man with the gun crept to her back door and saw something that made him sweat: a paw print in the snowy backyard. He had not expected a dog.

He whistled softly; no dog. Still, he pulled a Colt Woodsman .22 from his waistband and slunk to the garage wall to think.

In the house, Josie had pulled on a blue T-shirt and walked from her room to the kitchen. It was a short walk; it was a small house. Her mom, Julie, was in the kitchen, wearing her blue housecoat. She had set the table, putting out cereal and milk for breakfast and tins of potted meat for school-lunch sandwiches. Joe, Josie's dad, was eating canned pears.

At five feet four, Josie was already an inch taller than her mom and as tall as her dad. But she worried the worries of a child.

"You don't love me as much as you love the rest of them," she had blurted one day to her brother Charlie. At fifteen he was the oldest of the five Otero kids.

She felt better; she loved them all, Mom and Dad and Charlie, and Joey, who was nine, and Danny, fourteen, and Carmen, thirteen. She loved the way Joey studied his brothers and tried to be tough like them. He was so cute; the girls at Adams Elementary School adored his brown eyes. This morning he had dressed to draw attention: a long-sleeved shirt pulled over a yellow T-shirt and white undershirt, and purplish trousers with white pockets and white stripes down the back.

It was Tuesday. They would play with the dog, help Mom pack lunches, then Dad would drive Josie and Joey to school as he had done already for Charlie, Danny, and Carmen. Mom had laid their coats on a chair.

Outside, the man hesitated.

In the pockets of his parka he carried rope, venetian blind cord, gags, white adhesive tape, a knife, and plastic bags.

The Oteros had lived in Camden, New Jersey, and then the Panama Canal Zone for seven years, and then their native Puerto Rico with relatives for a few months. They had bought their house in Wichita only ten weeks earlier and were still getting their bearings. Wichita was a big airplane manufacturing center, and this spelled opportunity for Joe. He had retired as a technical sergeant after twenty years in the U.S. Air Force and now worked on airplanes and taught flying at Cook Field, a few miles outside Wichita, the Air Capital of the World. Boeing, Cessna, Beech, and Learjet all had big factories there; the city that once sent sixteen-hundred B-29 Superfortress bombers to war now supplied airlines and movie stars with jets. Julie had taken a job at Coleman, the camping equipment factory, but was laid off a few weeks later in a downsizing.

They now lived among the 260,000 people of Wichita, many of whom were ex-farm kids who cherished the trust they felt for their neighbors and left their doors unlocked. The airplane manufacturers had come to Wichita decades earlier in part because they were able to hire young people who had grown up on neighboring farms, learning how to fix tractor engines and carburetors from early childhood, and these workers and their families had brought their farm sensibilities with them to the city. People still left the keys in their cars at night and took casseroles to sick neighbors. This was a culture the Oteros liked, but Joe and Julie had more of a New York attitude about safety. Joe had acquired the dog, Lucky, who hated strangers. Joe had street smarts, and at age thirty-eight he was still wiry and strong. He'd been a champion boxer in Spanish Harlem. Julie, thirty-four, practiced judo and taught it to the children.

Joe was streetwise but playful. At work among Anglo strangers, he made people laugh by mocking his own Puerto Rican accent. He made shopping fun, once dragging the kids around a store on a sled as they laughed. When Joe signed the mortgage for the house (six rooms and an unfinished basement), he joked to the broker, "I hope I'm still alive when this lien is paid off."

One night Joe and Charlie had watched the movie In Cold Blood, the story of two losers who in 1959 murdered four members of the Clutter family in Holcomb, Kansas.

How could anybody do that? Charlie asked.

"Be glad nothing like that has ever happened to you," Joe said.

Dennis Rader had seen the woman and the girl one day while driving his wife to work at the Veterans Administration; his wife didn't like driving in snow. On Edgemoor Drive, he saw two dark-skinned females in a station wagon backing onto Murdock Avenue.

After that, he stalked them for weeks and took notes. He followed Julie several times as she drove Josie and Joey to school. He knew that they left about 8:45 and that it took Julie seven minutes to get back home. He knew the husband left for work around 8:00 AM. He did not want to confront the husband, so he timed his own arrival for about 8:20. The husband would be gone. The boy would be there, but he was incidental to the plan. He would kill the boy, but he did not want him. He wanted the girl.

Bind, Torture, Kill
The Inside Story of BTK, the Serial Killer Next Door. Copyright © by Roy Wenzl. Reprinted by permission of HarperCollins Publishers, Inc. All rights reserved. Available now wherever books are sold.

Excerpted from Bind, Torture, Kill: The Inside Story of BTK, the Serial Killer Next Door by Roy Wenzl, Tim Potter, Hurst Laviana, L. Kelly
All rights reserved by the original copyright owners. Excerpts are provided for display purposes only and may not be reproduced, reprinted or distributed without the written permission of the publisher.