Black Scholars on the Line 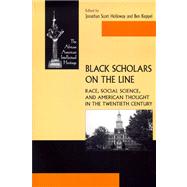 Black Scholars on the Line: Race, Social Science, and American Thought in the Twentieth Century explores the development of American social science by highlighting the contributions of those scholars who were both students and objects of a segregated society. The book asks how segregation has influenced, and continues to influence, the development of American social thought and social science scholarship.
What is included with this book?