The Book of Time #3: Circle of Gold 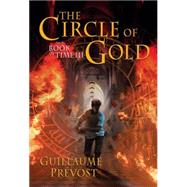 To rescue his father, Sam survived a Viking attack, threats from Chicago gangsters, a tribe of enraged cavemen, and the explosion of Mount Vesuvius. He stood trial for theft in ancient Greece and faced down Vlad the Impaler - the model for Count Dracula. Now he's returned with his father to the present day - but the faceless enemy who attempted to keep them from coming back is still trying to stop them. To find him and defeat him once and for all, Sam must make one last series of trips throughTime, encountering the tomb of a Chinese emperor, the secrets of Renaissance Rome, and finally, frighteningly, worst of all: the future.