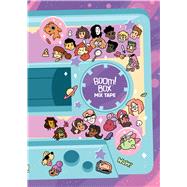 Hit play on a collection of short comics that embody the BOOM! Box aesthetic, an eclectic mix of jubilant tales from off the beaten track.

From the beginning, BOOM! Box has had one mission in mind - to bring original, unconventional characters and stories to life in the most gleeful way possible. The BOOM! Box Mix Tape is an eclectic mix of comics that showcases beloved characters from established BOOM! Box series as well as original tales from up-and-coming writers and artists.

Features work from critically acclaimed creators John Allison, Ryan North, James Tynion IV, Ngozi Ukazu, and many more, along with new stories from BOOM! Box favorites Lumberjanes, Giant Days, Cyanide & Happiness, Goldie Vance, and The Backstagers!
Shannon Watters is the senior editor and head of BOOM! Box line at BOOM! Studios, the imprint behind critically-acclaimed comics and graphic novels like GIANT DAYS, THE BACKSTAGERS, LUMBERJANES, FENCE, GOLDIE VANCE, HEAVY VINYL, THE AVANT-GUARDS, and many, many others. She is also the co-creator and co-writer of the award-winning hit comic book series LUMBERJANES. She lives with her partner in Los Angeles, CA.

James Tynion IV started in the comics business assisting Scott Snyder in writing backup stories for Snyder's groundbreaking Batman series. Tynion soon began writing Talon, a series that spun out of the hugely popular "Batman: The Court of Owls" story line. He has also written Batman: Detective Comics, Constantine: The Hellblazer, and Red Hood and the Outlaws and is currently at the helm of Justice League Dark.
What is included with this book?