Boom, Bust, Exodus The Rust Belt, the Maquilas, and a Tale of Two Cities 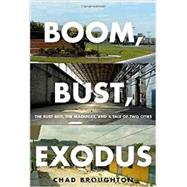 Donald Trump and Bernie Sanders owe much of their unexpected popularity in the 2016 primaries to their respective stances on trade and immigration policy.

Political elites and policy experts have been bewildered by combative talk of building a wall and the ubiquity of anti-TPP (Trans-Pacific Partnership) sloganeering in what they see as a bizarre election cycle. They have scrambled to explain new political fault lines that have emerged in both major political parties, largely around trade and immigration.

In struggling industrial towns and cities, the rise of Trump and Sanders was less of a surprise. These places have long weathered globalization's storm. Many feel left behind and sold short. They are anxious, and they're demanding answers.

Galesburg, Illinois, is one such city.

In 2002, the town of Galesburg, a slowly declining Rustbelt city of 33,000 in western Illinois, learned that it would soon lose its largest factory, a Maytag refrigerator plant that had anchored Galesburg's social and economic life for decades. Workers at the plant earned $15.14 an hour, had good insurance, and were assured a solid retirement. In 2004, the plant was relocated to Reynosa, Mexico, where workers sometimes spent 13-hour days assembling refrigerators for $1.10 an hour.

In Boom, Bust, Exodus, Chad Broughton offers a ground-level look at the rapid transition to a globalized economy, from the perspective of those whose lives it has most deeply affected. We live in a commoditized world, increasingly divorced from the origins of the goods we consume; it is easy to ignore who is manufacturing our smart phones and hybrid cars; and where they come from no longer seems to matter. And yet, Broughton shows, the who and where matter deeply, and in this book he puts human faces to the relentless cycle of global manufacturing.

It is a tale of two cities. In Galesburg, where parts of the empty Maytag factory still stand, a hollowed out version of the American dream, the economy is a shadow of what it once was. Reynosa, in contrast, has become one of the exploding post-NAFTA "second-tier cities" of the developing world, thanks to the influx of foreign-owned, export-oriented maquiladoras--an industrial promised land throbbing with the energy of commerce, legal and illegal. And yet even these distinctions, Broughton shows, cannot be finely drawn: families in Reynosa also struggle to get by, and the city is beset by violence and a ruthless drug war. Those left behind in the post-Industrial decline of Galesburg, meanwhile, do not see themselves as helpless victims: they have gone back to school, pursued new careers, and learned to adapt and even thrive.

In an era of growing inequality and a downsized middle class, Boom, Bust, Exodus gives us the voices of those who have borne the heaviest burdens of the economic upheavals of the past three decades. A deeply personal work grounded in solid scholarship, this important, immersive, and affecting book brings home the price and the cost of globalization.

Chad Broughton is Senior Lecturer in Public Policy Studies and Faculty Director of the Chicago Studies Program at the University of Chicago.