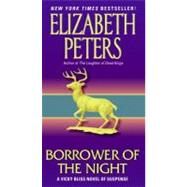 Four classic titles by "New York Times"-bestselling author Peters are now reissued in tall Premium Editions, to tie in with the release of her newest hardcover, "The Laughter of Dead Kings." Reissue.
Borrower of the Night
A Vicky Bliss Novel of Suspense

When I was ten years old, I knew I was never going to get married. Not only was I six inches taller than any boy in the fifth grade except Matthew Finch, who was five ten and weighed ninety-eight pounds -- but my IQ was as formidable as my height. It was sixty points higher than that of any of the boys -- except the aforesaid Matthew Finch. I topped him by only thirty points.

I know -- this isn't the right way to start a narrative, if I hope to command the sympathy of the reader. A narrator should at least try to sound modest. But believe me, I'm not bragging. The facts are as stated, and they are a handicap, not a cause for conceit. If there is anything worse than being a tall girl, it is being a tall smart girl.

For several years my decision didn't give me much pain. I wasn't thinking seriously of marriage in the fifth grade. Then I reached adolescence, and the trouble began. I kept growing up, but I grew in another dimension besides height. The results were appalling. I won't quote my final proportions; they call to mind one of those revolting Bunnies in Playboy. I dieted strenuously, but that only made matters worse. I got thin in all the right places and I was still broad where, as the old classic says, a broad should be broad.

Mind you, I am still not bragging. I am not beautiful. I admire people who are slender and fine-boned and aesthetic-looking. The heroine of my adolescent daydreams had a heartshaped face framed in clouds of smoky black hair. She was a tiny creature with an ivory complexion and a rosebud mouth. When she was enfolded in the hero's brawny arms, her head only reached as high as his heart.

All my genes come from my father's Scandinavian ancestors-big blond men with rosy cheeks and blazing blue eyes. They were about as aesthetic-looking as oxen. That's what I felt like -- a big, blond, blue-eyed cow.

The result of this was to make me painfully shy. I suppose that seems funny. Nobody expects a bouncing Brunhild to be self-conscious. But I was. The intelligent, sensitive, poetic boys were terrified of me; and the ones that weren't terrified didn't want to talk about poetry or Prescott. They didn't want to talk at all.

Rubbing my bruises, I became a confirmed misandrist. That attitude left me lots of time in which to study. I collected degrees the way some girls collect engagement rings. Then I got a job as a history instructor at a small Midwestern college which, in view of what is to follow, had better be nameless. It was there I met Tony. Tony teaches history too. He's bright; very bright. He is also six feet five Inches tall, and, except for his height, he rather resembles Keats in the later stages of consumption.

I met Tony on the occasion of the first departmental faculty meeting. I was late. Being late was a mistake; I hate walking the gauntlet of all those male eyes. There was one other woman present. She looked the way I wanted to look-thin, dark, and intellectual. I smiled hopefully at her and received a fishy stare in return. Most women take an instant dislike to me. I can't say I don't know why.

I spotted Tony amid the crowd because of his height. There were other things worth noticing -- big brown eyes, broad shoulders, and black hair that flopped over his forehead and curled around his ears. His face was fineboned and aesthetic-looking. At that moment, however, it had the same expression that was on all the other male faces, except that of Dr. Bronson, the head of the department. He had interviewed me and had hired me in spite of my measurements. I'm not kidding; it is a common delusion, unshaken by resumes and grades, that a woman with my proportions cannot have anything in her head but air.

I sat down with an awkward thump in the nearest chair, and several men gulped audibly. Dear old Dr. Bronson smiled his weary smile, brushed his silvery hair back from his intellectual forehead, and started the meeting.

It was the usual sort of meeting, with discussions of schedules and committees and so on. After it was over I headed for the door. Tony was there ahead of me.

I don't remember how he got me out of the building and into the Campus Coffee Shoppe, but I have never denied he is a fairly smooth talker. I remember some of our conversation. I hadn't encountered a technique quite like his before.

The first thing he said was,

"Will you marry me?"

"Haven't you ever heard of love at first sight?"

"I've heard of it. I don't believe in it. And if I did, love and marriage don't necessarily go together. Au contraire."

"So beautiful and so cynical," said Tony sadly. "Doesn't my honorable proposal restore your faith in my sex?"

"It merely reinforces my impression that you are crazy."

"Look at it this way." Tony put his elbows on the table. The table wasn't very clean, but neither were Tony's elbows; I deduced that this pose was characteristic. "AH my life I've been looking for my ideal woman. I'm pushing thirty, you know; I've had time to think about it. Beauty, brains, and a sense of humor, that's what I want. Now I know you're intelligent or old Bronson wouldn't have hired you. He's above the sins of the flesh, or thinks he is. You are obviously beautiful.Your sense of humor-"

"Ha," I said. "You deduced that from the twinkle in my eye, I suppose."

Borrower of the Night
A Vicky Bliss Novel of Suspense. Copyright © by Elizabeth Peters. Reprinted by permission of HarperCollins Publishers, Inc. All rights reserved. Available now wherever books are sold.

Excerpted from Borrower of the Night by Elizabeth Peters
All rights reserved by the original copyright owners. Excerpts are provided for display purposes only and may not be reproduced, reprinted or distributed without the written permission of the publisher.