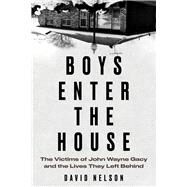 "Here is a work that emphasizes the full view of the lives of those young people that Gacy took. . . . It is essentially the Gacy story in reverse. Victims first.”
—Jeff Coen, author of Murder in Canaryville

As investigators brought out the bagged remains of several dozen young men from a small Chicago ranch home and paraded them in front of a crowd of TV reporters and spectators, attention quickly turned to the owner of the house. John Gacy was an upstanding citizen, active in local politics and charities, famous for his themed parties and appearances as Pogo the Clown.

But in the winter of 1978–79, he became known as one of many so-called “sex murderers” who had begun gaining notoriety in the random brutality of the 1970s. As public interest grew rapidly, victims became footnotes and statistics, lives lost not just to violence, but to history.

Through the testimony of siblings, parents, friends, lovers, and other witnesses close to the case, Boys Enter the House retraces the footsteps of these victims as they make their way to the doorstep of the Gacy house itself.
David Nelson is the author of several short stories published in the Rappahannock Review, TishmanReview, and Another Chicago Maganize. A Chicago-based writer and a Masters graduate of Northwestern University’s Medill School of Journalism, Nelson reported in 2013 on the ongoing identification process for war victims of the Balkans conflicts. His work was published by the Institute for War and Peace Reporting (IWPR) and continues to be used as an educational resource by the International Commission on Missing Persons. Nelson has been researching the John Wayne Gacy case since 2012, when he published an update on the case’s developments for Medill.
The Greyhound Bus Boy
The Poor Side of Town
Class of 1973
All Happy Families
Silly Love Songs
In the Company of Homosexuals
The Runaways
Summerdale Avenue
Light and Concrete
The Gallery of Grief
Miami and Elston
Remember Me Always