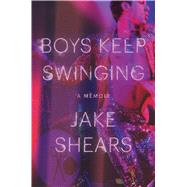 In the bestselling tradition of Bruce Springsteen’s Born to Run, Patti Smith’s Just Kids, and Carrie Brownstein’s Hunger Makes Me a Modern Girl, the lead singer of the multiplatinum-selling band Scissor Sisters explores his evolution as a young artist: coming of age in the Pacific Northwest and Arizona, his entry into New York City’s electrifying, ever-changing music scene, and the Scissor Sisters’ rise as they reached international fame in the early 2000s.

Before hitting the stage as the lead singer of the iconic glam rock band Scissor Sisters, Jake Shears was Jason Sellards, a teenage boy in Arizona living a double life and unable to hide it any longer, resulting in a confusing and confining time in high school as his classmates bullied him and teachers showed little sympathy.

It wasn’t until years later, during a trip to visit a childhood friend in New York City, that Jake met a talented musician nicknamed Babydaddy—the stage name of Scott Hoffman. Jake had found a kindred spirit, someone thirsting for stardom and freedom. Their instant bond led them to form Scissor Sisters. First performing in the smoky gay nightclubs of New York City, then finding massive success in the United Kingdom, Scissor Sisters would become revered by the LGBTQ community, reach platinum status, and also win multiple accolades with hits like “Take Your Mama” and “I Don’t Feel Like Dancin’,” as well as their cult-favorite cover of Pink Floyd’s “Comfortably Numb.”

Candid and courageous, Shears’s writing sings with the same powerful, spirited presence that he brings to his live performances. Following his development from a misfit boy who grew to a dazzling rock star, this entertaining and evocative memoir will be an inspiration to anyone with determination and a dream.