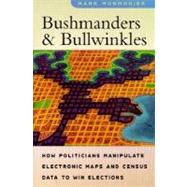 For years Mark Monmonier, "a prose stylist of no mean ability or charm" according to the Washington Post, has delighted readers with his insightful understanding of cartography as an art and technology that is both deceptive and revealing. Now he turns his focus to the story of political cartography and the redrawing of congressional districts. His title Bushmanders and Bullwinklescombines gerrymanderwith the surname of the president who actively tolerated racial gerrymandering and draws attention to the ridiculously shaped congressional districts that evoke the antlers of the moose who shared the cartoon spotlight with Rocky the Flying Squirrel. Written from the perspective of a cartographer rather than a political scientist, Bushmanders and Bullwinklesexamines the political tales maps tell when votes and power are at stake. Monmonier shows how redistricting committees carve out favorable election districts for themselves and their allies; how disgruntled politicians use shape to challenge alleged racial gerrymanders; and how geographic information systems can make reapportionment a controversial process with outrageous products. He also explores controversies over the proper roles of natural boundaries, media maps, census enumeration, and ethnic identity. Raising important questions about Supreme Court decisions in regulating redistricting, Monmonier asks if the focus on form rather than function may be little more than a distraction from larger issues like election reform. Characterized by the same wit and clarity as Monmonier's previous books, Bushmanders and Bullwinklesis essential background for understanding what might prove the most contentious political debate of the new decade.
A professor of geography in the Maxwell School of Citizenship and Public Affairs at Syracuse University, Mark Monmonier is the author or coauthor of eleven books, including How to Lie with Maps, Cartographies of Danger: Mapping Hazards in America, and Air Apparent: How Meteorologists Learned to Map, Predict, and Dramatize Weather, all published by the University of Chicago Press.
What is included with this book?