The Cambridge Companion to Spinoza

, by Edited by Don Garrett 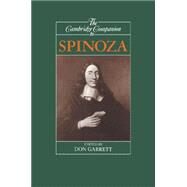 Benedict (Baruch) de Spinoza has been one of the most inspiring and influential philosophers of the modern era, yet also one of the most difficult and most frequently misunderstood. The essays in this volume provide a clear and systematic exegesis of Spinoza's thought informed by the most recent scholarship. They cover his metaphysics, epistemology, philosophy of science, psychology, ethics, political theory, theology, and scriptural interpretation, as well as his life and influence on later thinkers.
What is included with this book?