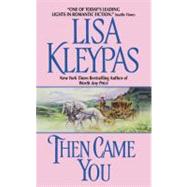 She thought her heart was safe, but . . . Reckless, wild, and beautiful, Lily Lawson delights in shocking proper London society -- and now she is determined to rescue her sister from an unwanted impending marriage to the notorious Alex, Lord Raiford, by fair means or foul. But while she succeeds outrageously, Alex is a master gamesman who is not to be undone. Alex has lost one bride, yet he is enchanted by this remarkable lady who is willing to break any rule to flaunt her independence. When Lily offers him only scorn, he counters with kindness, and he parries her blistering barbs with gentle words and a soft, tender touch. The spirited miss will pay dearly for her interference -- with her body, her soul, and her stubborn, unyielding heart. But will Alex's own heart be the prize to be won in this sensuous game of love?
Then Came You

"Damn, damn...there it goes, the frigging thing!" A stream of curses floated on the gust of wind, shocking the guests at the water party.

The yacht was anchored in the middle of the Thames, the guests assembled in honor of King George. So far the party had been dull but dignified , everyone dutifully complimenting His Majesty′s magnificently fitted yacht. With its brocaded furniture, fine mahogany, chandeliers of clustered crystal droplets, gilt sphinxes, and carved lions poised in every corner, the yacht was a floating pleasure palace. The guests had all been drinking heavily in order to attain the mild euphoria that would substitute for a real sense of enjoyment.

Perhaps the gathering would have been more entertaining had the king′s health not been so poor. The recent death of his father and a taxing ordeal with gout had taken their toll, leaving him uncharacteristically morose. Now the king sought the company of people who would provide laughter and amusement to relieve his sense of isolation. That was why, it was said, he had specifically requested the presence of Miss Lily Lawson at the water party. It was only a matter of time, a languid young viscount had been heard to remark, until Miss Lawson would stir things up. As usual, she did not disappoint.

"Someone get the deuced thing!" Lily was heard to shout between lilting bursts of laughter. "The waves are moving it away from the boat!"

Grateful for the reprieve from ennui, the gentlemen rushed in the direction of the commotion. The women protested in annoyance as their escorts disappeared to the bow of the ship, where Lily hung over the railing and stared at some object floating in the water. "My favorite chapeau," Lily said in reply to the chorus of questions, indicating it with a sweep of her small hand. "The wind blew it right off my head!" She turned to her crowd of admirers, all of whom were ready to provide consolation. But she didn′t want sympathy -- she wanted the hat back. Grinning with mischief, she looked from one face to another. "Who will play the chivalrous gentleman and retrieve it for me?"

Lily had tossed the hat overboard on purpose. She could see that some of the gentlemen suspected as much, but that didn′t stop the torrent of gallant offers. "Allow me," one man cried, while another made a show of doffing his own hat and coat. "No, I insist that I be afforded the privilege!" A rapid debate ensued, for each one of them wished to gain Lily′s favor. But the water was rather turbulent today, and cold enough to cause a health-threatening chill. More importantly, it would be the ruination of an expensive, perfectly tailored coat.

Lily watched the controversy she had caused, her mouth curving with amusement. Preferring argument to action, the men were all posturing and making gallant statements. If anyone were inclined to rescue her hat, he would have done so by now. "What a sight," she said under her breath, staring at the bickering dandies. She would have respected a man who would step forward and tell her to go to hell, that no ridiculous pink hat was worth such a fuss, but none of them would dare. If Derek Craven were here, he would have laughed at her, or made a crude gesture that would have sent her into a fit of giggles. He and she both had similar contempt for the indolent, overperfumed, overmannered members of the ton.

Sighing, Lily switched her attention to the river, dark gray and choppy underneath the heavy sky. The Thames in springtime was unbearably cold. She lifted her face to the breeze, her eyes slitting as if she were a cat being stroked. Her hair was temporarily straightened by the wind, and then the shining black curls sprang to their usual buoyant disorder. Absently Lily pulled off the jeweled ribbon that had been tied around her forehead. Her gaze followed the ridges of waves as they broke against the side of the yacht.

"Mama..." she heard a little voice whisper. Lily shrank from the memory, but it wouldn′t disappear.

Suddenly she imagined she felt downy baby arms encircle her neck, delicate hair brush against her face, a child′s weight settle in her lap. The Italian sun was hot on the nape of her neck. The quack and bustle of a duck procession crossed the glassy surface of the pond. "Look, darling, " Lily murmured. "Look at the ducks. They′re coming to visit us!"

The little girl wriggled in excitement. A chubby hand lifted, and a miniature forefinger extended as the baby pointed to the parade of self-important ducks. Then she looked up at Lily with dark eyes, and a grin that revealed two tiny teeth. "Dah," came the exclamation, and Lily laughed sotfly.

"Ducks, my darling, and very handsome ones, too. Where did we put the bread to feed them? Dear me, I think I′m sitting on it..."

Another whisk of wind came, chasing away the pleasurable image. Moisture seeped beneath her lashes, and Lily felt a painful twisting in her chest. "Oh, Nicole," she whispered. She tried to breathe away the tightness, willed it to disappear,but it refused to go. Panic built swiftly inside her. Sometimes she could numb it with liquor, or divert her mind with gambling or gossip or hunting, but the escape was only temporary. She wanted her child. My baby...where are you...I′ll find you...Mama′s coming, don′t cry, don′t cry... The desperation was like a knife twisting deeper every moment. She had to do something at once, or she would go mad.

Then Came You. Copyright Â© by Lisa Kleypas . Reprinted by permission of HarperCollins Publishers, Inc. All rights reserved. Available now wherever books are sold.

Excerpted from Then Came You by Lisa Kleypas
All rights reserved by the original copyright owners. Excerpts are provided for display purposes only and may not be reproduced, reprinted or distributed without the written permission of the publisher.