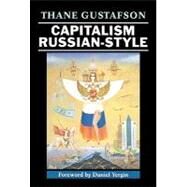 For a decade Russia has been dismantling communism and building capitalism. Describing a deeply flawed fledgling market economy, Capitalism Russian-Style provides a progress report on one of the most important economic experiments going on in the world today. It describes Russian achievements in building private banks and companies, stock exchanges, new laws and law courts. It analyzes the role of the mafia, the rise of new financial empires, entrepreneurs and business tycoons, and the shrinking Russian state. Thane Gustafson tells how the Soviet system was dismantled and the new market society was born. He argues that this new society is changing constantly, so that any assessment of success and failure would be premature. Identifying investment as vital to preserving Russia's status as a major industrial power, in his final chapter he examines the prospects for an economic miracle in Russia in the twenty-first century.
What is included with this book?