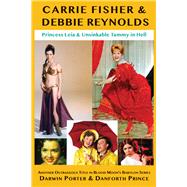 Debbie Reynolds and Carrie Fisher were the greatest mother-daughter act in show business.

Born in a shanty in El Paso, Texas, Debbie, a Texas tomboy, endured a life of poverty—jackrabbit every night for dinner—until she moved to California.

Blossoming into a young beauty, she won the title of Miss Burbank, which led to a movie contract. Stardom came relatively quickly when she was cast as the minty fresh ingénue in Singin’ in the Rain (1952), hailed as the greatest Hollywood musical of all time.

Frank Sinatra stole her virginity, but she married pop singer Eddie Fisher for the “official deflowering” (her words). “Debbie and Eddie,” the darling of fan magazines, reigned as “America’s Sweethearts.”

The fairytale ended when his best friend, producer Mike Todd, died in a plane crash. Fisher rushed to the side of his widow, the violet-eyed screen vamp, Elizabeth Taylor. He descended from Maggie the Cat’s Hot Tin Roof into her boudoir. His divorce from Debbie and his subsequent marriage to her best friend provided fodder for the scandal magazines until the day Elizabeth provoked another scandal, divorcing him to marry Richard Burton.

Through storm and rain, Debbie battled on, hitting a high point when she starred as Tammy in 1957, cast as the granddaughter of a Louisiana moonshiner, spouting pithy wisdom. “I’ll be singing my hit song on stage for the rest of my years.”

Her most memorable role was in 1964, when she was cast in the rags-to riches saga of The Unsinkable Molly Brown. (She even survived the sinking of the Titanic.) The role brought her an Oscar nomination.

Each of her three marriages was a disaster, the second one to a millionaire shoe manufacturing mogul who bankrupted both of them. Impoverished after the divorce, she ended up sleeping in her car.

Debbie mingled with the élite of Hollywood in the dying days of its Golden Age. Luminaries included Clark Gable (“if I were only twenty years younger….); Judy Garland (who propositioned her); Lana Turner; Bette Davis (“she was my daughter”); Katharine Hepburn; Spencer Tracy; Lucille Ball; and Glenn Ford, who fell in love with her.

Mass murderer Charles Manson sent her love letters; Liberace wanted her to enter into a “lavender marriage” with him, and James Dean “forced himself onto me” when she was up for the role of his girlfriend in Rebel Without a Cause.

“I turned down Warren Beatty,” Debbie claimed, “and didn’t even go for the handsome Gary Cooper, although he told me women called him ‘The Montana Mule.’ Bob Hope, a compulsive womanizer, also had to look elsewhere.”

A rebellious daughter, Carrie grew up to endure a life of living hell—pill popping, drug abuse, chronic anxiety, failed love affairs, bipolar disorder, and electroshock therapy. Carrie sometimes protested: “I don’t want to be the daughter of Debbie Reynolds. I battled demons that set my brain on fire.”

International celebrity came in 1977, when she played Princess Leia in Star Wars as an elaborately coiffed intergalactic princess, spearheading “The Force,” and strong enough to oppose the villainy of Darth Vader. She became the fantasy of teenage boys and sci-fi freaks.
A love affair with the married Harrison Ford faded into a marriage to singer Paul Simon as they crossed a Bridge Over Troubled Waters. A final marriage to a Hollywood agent ended when he decided he needed not a wife, but a husband for himself.

The princess turned writer in a series of autobiographical books praised for their lacerating insights into human frailty and awash with bubble and bounce, sprinkled with bons mots, an adroit verbal acrobat with words. The New York Times defined her as “one of the rare inhabitants of La-La Land who can actually write.”

In Carrie’s writings, Debbie often didn’t come out too well, depicted as a “casually narcissistic gorgon ill-suited for the real world.” As her star dimmed, cooled, and faded, mother took to the bottle.

Until the end, Debbie was resilient, a singing, dancing, sensation of massive talent, a button-nosed, boop-boopie-doo girl for six decades. She never lost her “Debbie-ness,” strutting her stuff, emoting like a storm—everything sprinkled with the stardust of yesterday.

What was her secret of perpetual youth? Carrie knew: “She drank bat’s blood for breakfast and smeared bug brains on her skin.”

Reconciled after years of separation, Carrie and Debbie came together at the end, not able to live apart. They couldn’t even die without each other. Their fans like to think they’re doing fine today in some galaxy far, far away.

Hailed for their ability to skewer the inflated, long-standing myths and icons of show-biz, Darwin Porter and Danforth Prince are the world's most prolific and visible biographers of Hollywood celebrities. Residents of New York City, and winners of book awards from many literary competitions across the U.S., they're co-authors and co-producers of streams of written entertainment about how America interprets its celebrities.