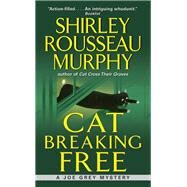 The fur starts flying when a gang from L.A. comes up to tranquil Molena Point, California, and begins breaking into the village's quaint shops. The fur of Joe Grey, Feline P.I., that is. After all, Molena Point has been his home since he was a kitten eating scraps from the garbage behind the local delicatessen, and he doesn't take well to marauding strangers. Joe even wonders whether the blonde who's moved into next to his human companion Clyde could be a part of the gangshe's been acting pretty suspicious lately. But when the strangers start trapping and caging feral catsspeaking cats like Joe and his girlfriend Dulcieit proves too much for the intrepid fourfooted detective. And when one of the gang is murdered, and a second mysterious death comes to light, he has no choice but to try to stop the crimes. Joe, Dulcie, and their tattercoat friend Kit, who used to be a stray herself, are deep into the investigation when they are able to release the three trapped cats. But as Kit leads them away to freedom, will she herself return to that wild life?
Cat Breaking Free
A Joe Grey Mystery

"We don't need that bimbo living next door," the tomcat hissed "Why would they rent to the likes of her?" His ears were back, his yellow eyes narrowed, his sleek gray body tense with disgust as he paced the top of the long brick barbecue, looking down at his human housemate. He kept his voice low, so not to alarm curious neighbors.

Joe Grey and Clyde had been together since Joe was a kitten, though it was just four years ago this summer that he discovered he could speak. He didn't know whether that revelation had been more shocking to him or to Clyde. For a human, to wake up one morning and find that his cat could argue back couldn't be easy. Joe paused now in his irritable pacing to study Clyde, then glanced toward the high patio wall behind him. Peering as intently as if he could see right through the white plaster barrier to the house next door, he considered the backroom of their neighbors' vacation cottage where Clyde's old flame had taken up residence.

"Bimbo," the tomcat repeated, muttering. "Why did they rent to her?"

"They only just bought the house," Clyde said. "Maybe they need the money."

"But why Chichi? And how did she find you?"

"Leave it, Joe. Don't get worked up." Clyde sat on the back steps with his first cup of coffee, enjoying the early -- morning sunshine. He scratched his bare knee and smoothed his dark, neat hair. "Call it coincidence."

The tomcat replied with a hiss. Chichi Barbi was not among his favorite humans; "bimbo" was too polite a word for the thieving little chit. "Maybe they don't know she moved in. Maybe she broke in, a squatter, like that homeless guy who..."

"Don't start, Joe. Don't make a federal case. That's so way out, even for your wild imagination!"

"Not at all," Joe said haughtily. "Look around you, that stuff happens. That homeless guy last winter spent three months crashing in other people's houses before anyone noticed. Three months of free bed and board, free food from the cupboards, use of all the facilities -- five houses before a neighbor started asking questions, then called the cops. Moved from house to house as innocent as you please and no one. . ."

"Chichi Barbi might be a lot of things, but she's not a housebreaker. That guy was a transient, half -- gone on drugs. You knew the Mannings were going to rent the place. Chichi might live a little loose, but she wouldn't. . ."

"Wouldn't what?" Joe's ears were back, his whiskers flat. He showed formidable teeth. "In San Francisco she rips you off for five hundred bucks, but she wouldn't rip off your neighbors? You want to tell me why not?"

Clyde stared at the tomcat and silently sipped his coffee. Clyde's work -- hardened hands were permanently stained with traces of grease from his automotive shop. Otherwise, he looked pretty good for a Saturday morning, not his usual ragged cutoffs and stained T -- shirt; almost respectable, the tomcat thought. He had showered and shaved before breakfast, blow -- dried his short, dark, freshly cut hair, and was dressed in clean tan walking shorts and a good -- looking ivory velour shirt. He was even wearing the handsome new Rockports that Ryan had admired in a shop window. "Pretty snazzy," Joe said, looking his housemate over. "Ryan's been a positive influence. She's right, you know -- with a little incentive, you clean up pretty good."

"Ryan Flannery has nothing to do with how I look in the morning. I simply felt like showering before I made coffee. There some law against that? And we weren't talking about Ryan, we were talking about Chichi Barbi."

"And I was wondering why Chichi has pushed herself off on you again. Wondering what she has in mind this time."

"Maybe she is here for a vacation," Clyde said. "A few weeks at the beach, and to shop, just as she said."

Dropping down from the barbecue to the chaise, Joe stretched out along the green cushion in a shaft of sunshine, and began to indolently wash his white paws, effectively dismissing Clyde. Around man and cat, the early -- morning light was cool and golden. Within the patio's high, plastered walls, their little world was private and serene -- a far cry from the scruffy, weedy plot this backyard had been some months ago, with its half-dead grass and open to the neighbors' inquisitive stares through the rotting, broken fence.

Above them, sunlight filtered gently down through the new young leaves of the maple tree to the brick paving, and around them, the raised planters were bright with spring flowers, the plastered benches scattered with comfortable cushions. Beyond the trellis roof that shaded the barbecue, they could see only a glimpse of the neighbors' rooftop, which now sheltered Chichi Barbi. Despite his dislike of the woman, Joe Grey had to smile. Chichi's sudden appearance might be innocent or might not, but for the two weeks since she'd moved in, she'd made Clyde's life miserable. He'd started locking the patio gate and kept the draperies pulled on that side of the house. He locked the front door when he was home and he studiously avoided the front yard, slipping around the far side of the house to the driveway, sliding quietly into his yellow Chevy roadster and pulling out with as little noise as he could manage.

"Anyway," Clyde said, "the morning's too nice to waste it thinking about some neighbor. How much damage can one airhead do?"

The gray tomcat's yellow -- eyed glance telegraphed a world of ideas on the subject. "You have a short memory -- and an amazing tolerance."

Joe kneaded the chaise pad in a satisfying rhythm. "One airhead bimbo with a big mouth and a nonstop talent for trouble, to say nothing of . . .

Excerpted from Cat Breaking Free by Shirley Rousseau Murphy
All rights reserved by the original copyright owners. Excerpts are provided for display purposes only and may not be reproduced, reprinted or distributed without the written permission of the publisher.