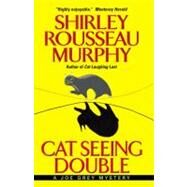 Romance is in the air in the charming seaside village of Molena Point, California. Everyone is excited about the upcoming wedding of its chief of police to the lovely Charlie Getz, even cool feline detective Joe Grey. But the festivities are interrupted when two uninvited guests try to blow up the church. Then one of the bride's good friends, building contractor Ryan Flannery, lands in a heap of trouble when her philandering husband is found dead. With suspicion falling on Ryan's shoulders, Joe Grey and his pals, Dulcie and Kit, set out to prove her innocence. Soon paw-deep in a tangle of jealousy, greed, and vengeance, Joe Grey, Dulcie, and Kit find themselves in the biggest cat fight of their lives -- a bare-clawed battle with a prey who is as cunning as he is deadly . . .
What is included with this book?

Ryan Flannery had no idea, when she dressed for the wedding of Chief of Police Max Harper on Saturday afternoon, that she would soon face the police not as a wedding guest among friendly uniformed officers, but as a prime murder suspect. No notion that the tentative new friendships she'd made within the department would turn without warning to that of investigators and possible offender.

An hour before the ceremony, half-dressed in a slip and scuffs and the first skirt she'd had on in weeks, she stepped into the kitchen alcove of her studio apartment to nuke a cup of coffee. Through the wide front windows the dropping sun blinded her, reflecting from the village rooftops and repeated as hundreds of brilliant signals across the surface of the sea, as if all the sea creatures held up little mirrors attempting to communicate with the land-bound before evening descended. Nearer, just below her balcony, the mosaic of rooftops among the oak trees was as serene as a storybook hamlet where all promises ended happily-ever-after. No smallest twinge of unease touched her, no sixth sense that early the next morning uniformed attendants to a murder would fill her garage stringing yellow crime tape, the coroner working on poor Rupert taking care not to disturb any evidence among the stack of broken windows with which the body was entangled -- her exhusband lying white and lifeless among shards of colored glass. And Ryan herself facing Detective Dallas Garza answering her uncle's questions as, cold and detached, he recorded her formal statement.

Pouring a cup of cold coffee left from breakfast, a brew that at 3:00 in the afternoon closely resembled crankcase oil, she stuck the cup in the microwave. She needed something to keep her awake. Even at what she considered the tender age of thirty-two she could no longer stay up until 1:00 in the morning and feel human the next day.

She'd driven down late last night from the mountains after paying off her carpenters and wrapping up a construction job, wanting to be back home and have her work squared away in plenty of time for the wedding. She'd pulled into her drive well after midnight dead for sleep, had unloaded the precious stained lass windows she'd found in a junk shop in San Andreas, locked her garage and truck and come upstairs. Pulling off her boots and jeans, she had fallen into bed -- wondering only briefly why her tarp, folded behind the stack of windows, had what looked like cracker crumbs and half-a-dozen Hershey wrappers among the layers when she unfolded it.

Someone had been in the truck bed, but she wasn't sure when.

Maybe one of the kids hanging around the job site, up there. Well, nothing was missing. Too tired to care, she'd rolled over and known nothing more until nearly dawn.

Waking, she'd lain in bed staring out at the black September sky, then dropped into sleep again like diving into deep, silky water. Awakening again at 9:00 feeling dull, she'd showered, unpacked her duffel, dumped her laundry in the washer, made a peanut butter and jelly sandwich for breakfast, and spent the middle of the day cleaning out her truck, putting away tools and stacking the antique windows more securely in the big double garage. Seven beautiful old windows she'd bought for a song, with wonderful designs of birds and leaves. It was amazing what you could pick up in the little back hills junk shops even today when every tourist was a bargain hunter.

Clyde had left a message on her phone tape, that he'd pick her up at 3:30 for the wedding. The ceremony was scheduled for 4:00 with a casual reception afterward in the garden of the village church. Ryan had helped Charlie pick out her wedding dress, and Charlie's aunt Wilma and several friends had handled the arrangements and the caterer and informal invitations, all of which had given Charlie a prime case of nerves. Charlie Getz, inclined to be a loner, was better at the easel or the typewriter or at housecleaning and maintenance repairs than at sorting out the details of a social function that would change her life as she knew it.

Because Charlie's parents were dead and she had no close male relatives, Ryan's uncle Dallas would give her away. And Clyde Damen, Max Harper's lifelong friend, would be best man. She wondered if he'd show up for his official duties dressed in sweatshirt and jeans. Never one for polish, Clyde was as unlike Ryan's philandering ex-husband as it was possible to be, and that made her like him quite a lot.

As she reached to open the microwave, a scratching sound at her window made her start. Turning, she caught her breath then swallowed back a laugh.

Two cats crouched on the sill peering in at her: Clyde's big gray tomcat and his lady pal, dark-stripped Dulcie. Two bold freeloaders who, before she left for San Andreas, had been at her door every morning.

How could they have known she was home? Or had they come every day for two months, expecting the handout they'd grown accustomed to? Oh, surely not. No cat was that tenacious, and certainly these cats never went hungry -- though at the moment, with their noses close to the glass, their whiskers drawing delicate patterns through the dusty surface, they presented the picture of ultimate greed and impatience.

And the tomcat had brought her a gift.

Joe Grey held his kill securely by its rear, its fur matted and wet from mauling. She stared at it, and looked into the burning yellow eyes of the self-satisfied tomcat, and choked back a laugh ...

Excerpted from Cat Seeing Double by Shirley Rousseau Murphy
All rights reserved by the original copyright owners. Excerpts are provided for display purposes only and may not be reproduced, reprinted or distributed without the written permission of the publisher.