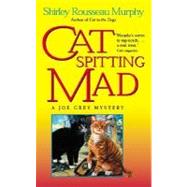 Hell hath no fury like a feline enraged. Though Joe Grey and Dulcie are merely housecats, they each have a strong sense of justice -- to complement their uncanny ability to read, speak, and use the telephone. And they're furious that Max Harper, police chief of Molena Point and preferred target for Joe's harmless pranks, has been accused of a gruesome double murder.The fleet-footed sleuthing duo is intent upon restoring an old friend's good name. But finding the missing little girl who was sole witness to the crime won't be easy -- especially with a hungry cougar on the prowl, a cat-killer on the loose ... and the kittenish antics of Joe and Dulcie's playful new "ward" causing big trouble that could take more than nine lives to survive.
Cat Spitting Mad
A Joe Grey Mystery

It was the tortoiseshell kit who found the bodies, blundering onto the murder scene as she barged into every disaster, all four paws reaching for trouble. She was prowling high up the hills in the pine forest when she heard the screams and came running, frightened and curious -- and was nearly trampled by the killer's horse as the rider raced away. Churning hooves sent rocks flying. The kit ran from him, tumbling and dodging.

But when the rider had vanished into the gray foggy woods, the curious kit returned to the path, grimacing at the smell of blood.

Two women lay sprawled across the bridle trail. Both were blond, both wore pants and boots. Neither moved. Their throats had been slashed; their blood was soaking into the earth. Backing away, the kit looked and looked, her terror cold and complete, her heart pounding.

She spun and ran again, a small black-and-brown streak bursting away alone through the darkening evening, scared nearly out of her fur.

This was late Saturday afternoon. The kit had vanished from Dulcie's house on the previous Wednesday, her fluffy tortoiseshell pantaloons waggling as she slid under the plastic flap of Dulcie's cat door and trotted away through the garden beneath a light rain, escaping for what the two older cats thought would be a little ramble of a few hours before supper. Dulcie and Joe, curled up by the fire, hadn't bothered to follow her -- they were tired of chasing after the kit.

"She'll have to take care of herself," Dulcie said, rolling over to gaze into the fire. But as the sky darkened not only with evening but with rain, Dulcie glanced worriedly toward the kitchen and her cat door.

Wilma, Dulcie's human housemate, passing through the room, looked down at the cats, frowning, her silver hair bright in the lamplight. "She'll be all right. It isn't raining hard."

"Not yet, it isn't," Dulcie said dourly. "It's going to pour. I can smell it." A human could never sort out such subleties as a change in the scent of the rain. She loved Wilma, but one had to make allowances.

"She won't go up into the hills tonight," Wilma said. "Not with a roast in the oven. Not that little glutton."

"Growing kitten," Joe Grey said, rolling onto his back. "Tom between insatiable wanderlust and insatiable appetite." But he, too, glanced toward the cat door.

In the firelight, Joe's sleek gray coat gleamed like polished pewter. His white nose and chest and paws shone brighter than the porcelain coffee cup Wilma was carrying to the kitchen. His yellow eyes remained fixed on the cat door.

Wilma sat down on the couch beside them, stroking Dulcie. "You two never want to admit that you worry about her. I could go look for her -- circle a few blocks before dinner."

Dulcie shrugged. "You want to crawl under bushes and run the rooftops?"

"Not really." Wilma tucked a strand of her long white hair into her coral barrette. "She'll be back any minute," she said doubtfully.

Ever since Joe and Dulcie discovered they could speak the human language, read the morning paper, and converse with their respective housemates, Dulcie and Wilma had had a far easier relationship than did Joe Grey and his bachelor human. Joe and Clyde were always at odds. Two stubborn males in one household. All that testosterone, Dulcie thought, translated into hardheaded opinions and hot tempers.

The advent of the two cats' sudden metamorphosis from ordinary cats (well, almost-they had after all always been unusually good-looking and bright, she thought smugly) into speaking, sentient felines had disrupted all their lives, cats and humans. Joe's relationship with Clyde, which had already been filled with goodhumored conflict, had become maddening and stressful for Clyde. Their arguments were so fierce they made her laugh -- a rollingover, helpless cat laugh. Were all bachelors so stubborn?

And speak of the devil, here came Clyde barging in through the back door dripping wet, no umbrella, wiping his feet on the throw rug, then pulling off his shoes. His dark, cropped hair was dripping, his windbreaker soaking. Dropping his jacket in the laundry, he came on through to the fire, turning to warm his backside. He had a hole in his left sock. Violent red socks, Dulcie saw, smiling. Clyde was never one for subleties. As Wilma went to get him a drink, Clyde sprawled in the easy chair, scowling.

"What's with you?" Joe gave him a penetrating, yellow-eyed gaze. "You look like you could chew fenders."

Clyde snorted. "The rumormongers. Having a field day."

Clyde nodded. The gossip about his good friend, Molena Point's chief of police, had left Clyde decidedly bad-tempered. The talk, in fact seemed to affect Clyde more than it did Harper. To imply, as some villagers were doing, that Harper was having an affair with one of the three women he rode with -- or maybe with all three -- was beyond ridiculous. Twenty-two-year-old Ruthie Marner was a looker, all right, as was Ruthie's mother. And Crystal Ryder was not only a looker but definitely on the make.

But Harper rode with them for reasons that had nothing to do with lust or romance. The cats couldn't remember the villagers -- most of whom loved and respected Harper -- ever before spreading or even tolerating such gossip.

Clyde accepted his glass from Wilma, swallowing half the whiskey-and-water in an angry gulp. "A bunch of damned troublemakers."

"Agreed," Wilma said, sitting down on the end of the velvet couch nearest the fire. "But the gossip has to die. Nothing to keep it going."

Clyde glanced around the room. "Where's the..."

Excerpted from Cat Spitting Mad by Shirley Rousseau Murphy
All rights reserved by the original copyright owners. Excerpts are provided for display purposes only and may not be reproduced, reprinted or distributed without the written permission of the publisher.