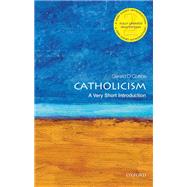 Despite a long history of external threats and internal strife, the Roman Catholic Church remains a vast and influential presence in our modern world. But what were its origins, and how has it changed and adapted over the centuries? After Pope Benedict XVI dramatically resigned in early 2013
(the first Pope to resign since the fifteenth century), and Pope Francis was elected, many wondered what direction he would lead the Church in, and whether the Church could modernise in the face of the demands of our world.

In this Very Short Introduction, Gerald O'Collins covers the history of the Catholic Church, and considers some of the key issues facing Catholicism today, such as the catastrophic revelations about clerical child abuse, the impact of the growth of Islam, and the destruction in the Middle East of
ancient Christian church communities. He also shows how Catholics are being increasingly challenged by an opposition between their traditional Christian values and rights which are endorsed by the secular world, such as the right to physician assisted suicide or same-sex marriage, and considers the
future for the largest and oldest institution in the world.

Gerald O'Collins, SJ, PhD (Cantab.) is Adjunct Professor of the Australian Catholic University, a research fellow of the University of Divinity (Melbourne), and Professor Emeritus of the Gregorian University (Rome), where he taught for 33 years and also served as Dean of the Faculty of Theology. He has written or co-written 67 books, including Catholicism: The Story of Catholic Christianity (OUP, 2004), Salvation for All (OUP, 2008), and The Second Vatican Council on Other Religions (OUP, 2013). He has authored hundreds of articles in professional and popular journals, and lectured at many universities and colleges worldwide. In 2006 he was created a Companion of the General Division of the Order of Australia (AC), the highest civil honour granted through the Australian government.