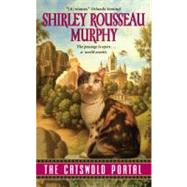 A striking new reissue of an epic fantasy by popular Harper author Shirley Rousseau Murphy, featuring a princess's dangerous quest to reclaim her throne...and, of course, cats! There is a door in an artist's garden: an elaborate carved passageway into a realm ruled by a dark sorceress queen. There entities strange and wondrous roam the Netherworld--yet none as astonishing as the shape-shifting Catswold... Raised by the oldwitch Mag, Melissa discovers a perilous secret. She has more than one form--human girl and magical cat--and once inhabited two worlds. And it is her destiny to return to a mystic realm of wonder and terror, to do battle for her people's liberation and the crown that is rightfully hers. A man beset by tragedy, painter Braden West is intrigued by the calico cat who has charmed her way into his studio. But his "guest" is more than she seems, and Braden's very existence will be radically altered as he follows Melissa from the Hell Pit into the dread perils of an evil ruling court, thrust into the heart of a magical conflict with more at stake than he could possibly have imagined.
What is included with this book?

He ran pounding through the forest, his tennis shoes snappingdry branches as he stretched out in a long lope. Runningeased the tightness, the tension. He was tall and lean,dark haired. Dodging between the broad trunks of redwoodtrees he headed uphill toward the mountain, swerving pastdeadfalls, trampling ferns that stroked his bare legs like animalpaws. Strange thought, Alice's kind of thought, animalpaws. He shivered, but not from the cold. It was dusk; Alicewould be cleaning up, putting away her paints, washing herbrushes, thinking about dinner, wondering whether to go outor open something. She wouldn't speak to him while he wasstill working, would go out to the kitchen and stand lookingin the freezer.

She would have done those things. Had done them, once.The pain ran with him, he couldn't shake it, couldn't leaveit alone.

Months after the funeral he had started to heal, to mend,the hurting began to dull, some feeling returning besidesrage and grief. But now suddenly his pain was raw again, thelast few days were as if her death had just happened, herbody in the wrecked car ... He swerved away from theravine and ran steeply up between boulders, but at the footof Mount Tamalpais he turned back. It was dark now withinthe forest, though the sky above the giant redwoods still heldlight. He ran downhill again for a long way before lightsbegan to flicker between the trees from isolated houses bravingthe forest gloom. The chill air held the smoke of fireplacesand he could smell early suppers cooking. Alice would be saying, Let's just get a hamburger, I don't feel likecooking, don't feel like getting dressed. She'd fix herself adrink, go to shower off the smell of inks and fixative, slip ona clean pair of jeans. His breath caught, seeing her body wetfrom the shower, little droplets on her breasts, her long palehair beaded with water.

He was in sight of the village now; it stretched awaybelow him, the last light of evening clinging along the streetand to the roofs of the shops. He could hear a radio somewhereahead, and the swish of cars on the damp macadam,then suddenly the streetlights burst on all at once. His feetcrushed fallen branches then he hit the sidewalk and an explosionof speed took him past the library, the building's tallwindows reflecting car lights against the books. He couldsmell frying hamburgers from the Creek, and farther onsomething Italian from Anthea's. He swerved past villagersclosing up shop, and each looked up at him. “Hey, Brade!”“Evening, Braden.” He dodged the first Greyhound commutersreturning from the city. “Hey there, West.” “Nicenight for running.” He nodded, raised a hand, and poundedon past. His long body reflected running distortions in theshop windows. Crossing the dead-end lane to the gardenwhere his studio stood among other houses, he glanced upthe hill toward Sam's Bar that stood at the edge of the forest,thought of stopping for a beer, but then went on.

He cooled down on the veranda, poured himself a bourbon.Pulling off his tennis shoes, sitting sprawled in thecampaign chair, he stared up at the tangled garden thatbegan at his terrace and climbed the hill above him; a communalgarden shared by the six houses that circled it. It wasa pleasant, informal stretch of bushes and flowers and dwarftrees creating a small jungle. Two of the three houses abovewere dark. The lights in the center house went off as hewatched, and his neighbor came out, her dark skin hardlyvisible against the falling night, her white dress a bright signal.She crossed the garden to the lane with long, easystrides, waving to him. “Evening, Brade,” her voice rich asvelvet. He lifted a hand, smiling, watched her slide into her convertible and turn at the dead end beside Sam's, driveslowly down the lane and into the traffic of the busier road,heading for the city. But when a cat cried on the terracesabove, he shivered, unsteady again. He could see its eyes reflectedfor an instant, then it was gone.

As he rose to go in, he felt for a split second the warmthof anticipation. His eager mood burst suddenly: Alice wasn'tthere. Alice was dead. The loneliness hit him like a blow,and he turned back and poured another whiskey.

Evening was the worst. They had liked to sit on the terraceafter a day's work, unwinding, watching the gardendarken, watching the stars come spilling above the redwoodforest that crowned the hill above the upper houses. In theevenings they had shared little things, random thoughts,coming together in a new way after working all day side byside in the studio, seldom talking, just being near each other.In the evenings Alice came alive in a different way from herdeeply concentrating, working self, as if the night stirred awild streak in her. Sometimes she would rise from the terraceand, carrying her drink, would walk up the garden tostand looking at the tool shed door.

And now suddenly Alice's death hit him as if it had justhappened -- his frenzy as he tore at the jammed car door, ashe beat at the window. Alice lay twisted inside, her hair tangledin the steering wheel, blood running down her face. Therescue squad tried to cut the door away with gas torches, buthe had fought them, crazy with fear that they'd burn her ...

The Catswold Portal. Copyright © by Shirley Murphy. Reprinted by permission of HarperCollins Publishers, Inc. All rights reserved. Available now wherever books are sold.

Excerpted from The Catswold Portal by Shirley Rousseau Murphy
All rights reserved by the original copyright owners. Excerpts are provided for display purposes only and may not be reproduced, reprinted or distributed without the written permission of the publisher.