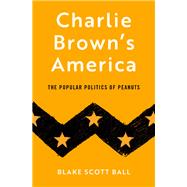 Despite--or because of--its huge popular culture status, Peanuts enabled cartoonist Charles Schulz to offer political commentary on the most controversial topics of postwar American culture through the voices of Charlie Brown, Snoopy, and the Peanuts gang.

In postwar America, there was no newspaper comic strip more recognizable than Charles Schulz's Peanuts. It was everywhere, not just in thousands of daily newspapers. For nearly fifty years, Peanuts was a mainstay of American popular culture in television, movies, and merchandising, from the Macy's Thanksgiving Day Parade to the White House to the breakfast table.

Most people have come to associate Peanuts with the innocence of childhood, not the social and political turmoil of the 1960s and 1970s. Some have even argued that Peanuts was so beloved because it was apolitical. The truth, as Blake Scott Ball shows, is that Peanuts was very political. Whether it was the battles over the Vietnam War, racial integration, feminism, or the future of a nuclear world, Peanuts was a daily conversation about very real hopes and fears and the political realities of the Cold War world. As thousands of fan letters, interviews, and behind-the-scenes documents reveal, Charles Schulz used his comic strip to project his ideas to a mass audience and comment on the rapidly changing politics of America.

Charlie Brown's America covers all of these debates and much more in a historical journey through the tumultuous decades of the Cold War as seen through the eyes of Charlie Brown, Lucy, Linus, Peppermint Patty, Snoopy and the rest of the Peanuts gang.

Acknowledgments
Introduction
Ch 1 Bless You for Charlie Brown: Evangelicalism, Civil Religion, and Peanuts in Postwar America
Ch 2 Crosshatch Is Beautiful: Franklin, Color-Blindness, and the Limits of Racial Integration in Peanuts
Ch 3 Snoopy Is the Hero in Vietnam: Ambivalence, Empathy, and Peanuts' Vietnam War
Ch 4 I Believe in Conserving Energy: Personal Responsibility, Consumer Politics, and Peanuts' Pro-Capitalist Environmental Ethos
Ch 5 I Have a Vision, Charlie Brown: Gender Roles, Abortion Rights, Sex Education, and Peanuts in the Age of the Women's Movement
Conclusion
Notes
Bibliography
What is included with this book?