Chew on This : Everything You Don't Want to Know about Fast Food 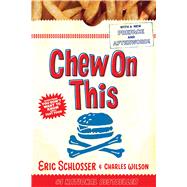 CHEW ON THIS: EVERYTHING YOU DON’T WANT TO KNOW ABOUT FAST FOOD by Eric Schlosser and Charles Wilson. Copyright (c) 2006 by Eric Schlosser. Reprinted by permission of Houghton Mifflin Company. All rights reserved.

Excerpted from Chew on This: Everything You Don't Want to Know about Fast Food by Eric Schlosser, Charles Wilson, Eric Schlosser
All rights reserved by the original copyright owners. Excerpts are provided for display purposes only and may not be reproduced, reprinted or distributed without the written permission of the publisher.