City of Ash and Red 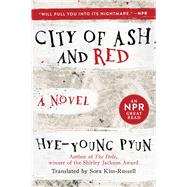 From the Shirley Jackson Award–winning author of The Hole, a Kafkaesque tale of crime and punishment hailed by Korea’s Wall Street Journal as “an airtight masterpiece.”

Distinguished for his talents as a rat killer, the nameless protagonist of Hye-young Pyun's City of Ash and Red is sent by the extermination company he works for on an extended assignment in C, a country descending into chaos and paranoia, swept by a contagious disease, and flooded with trash. No sooner does he disembark than he is whisked away by quarantine officials and detained overnight. Isolated and forgotten, he realizes that he is stranded with no means of contacting the outside world. Still worse, when he finally manages to reach an old friend, he is told that his ex-wife's body was found in his apartment and he is the prime suspect. Barely managing to escape arrest, he must struggle to survive in the streets of this foreign city gripped with fear of contamination and reestablish contact with his company and friends in order to clear his reputation.

But as the man's former life slips further and further from his grasp, and he looks back on his time with his wife, it becomes clear that he may not quite be who he seems. From the bestselling author of The Hole, City of Ash and Red is an apocalyptic account of the destructive impact of fear and paranoia on people's lives as well as a haunting novel about a man’s loss of himself and his humanity.
Hye-young Pyunwas born in 1972. She earned her undergraduate degree in creative writing and graduate degree in Korean literature from Hanyang University. Her published works include the short story collections Aoi Garden, To The Kennels, Evening Courtship, and Night Passes; and the novels City of Ash and Red, They Went to the Western Forest, The Law of Lines, The Hole, and Let The Dead. She has received the Hankook Ilbo Literary Award, the Yi Hyo-Seok Literature Prize, the Today's Young Writer Award, the Dong-in Literary Award, the Yi Sang Literary Award, and the Contemporary Literature (Hyundai Munhak) Award. Her novel TheHole was the 2017 winner of the Shirley Jackson Award, and City of Ash and Red was an NPR Great Read. In 2019, she was awarded the Kim Yujeong Literary Award for her short story "Hotel Window." Her short stories have been published in The New Yorker, Harper's Magazine, and Words Without Borders. She currently teaches creative writing at Myongji University and lives in Seoul, Korea.

Sora Kim-Russell's translations include, besides The Hole, City of Ash and Red, and The Law of Lines by Hye-young Pyun, Un-su Kim's The Plotters; Hwang Sok-yong's At Dusk, which was longlisted for the Man Booker International Prize; and Suah Bae's Nowhere to be Found. Her full list of publications can be found at sorakimrussell.com. She lives in Seoul, South Korea.