Civic Education and the Future of American Citizenship 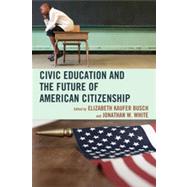 The Founders of this nation believed that the government they were creating required a civically educated populace. Such an education aimed to cultivate enlightened, informed, and vigilant citizens who could perpetuate and improve the nation. Unfortunately, America's contemporary youth seem to lack adequate opportunities, if not also the ability or will, to critically examine the foundations of this nation. An even larger problem is an increasing ambivalence toward education in general. Stepping into this void is a diverse group of educators, intellectuals, and businesspeople, brought together in Civic Education and the Future of American Citizenshipto grapple with the issue of civic illiteracy and its consequences. The essays, edited by Elizabeth Kaufer Busch and Jonathan W. White, force us to not only reexamine the goals of civic education in America but also those of liberal education more broadly.
What is included with this book?