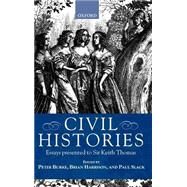 This volume is a tribute to Sir Keith Thomas, one of Britain's greatest living historians, by distinguished scholars who have been his students. They describe the changing meanings of civility and civil manners since the sixteenth century, showing how the terms were used with respect to different people--women, the English and Welsh, imperialists, businessmen--and their effects in fields as varied as sexual relations, religion, urban politics, and private life.
What is included with this book?